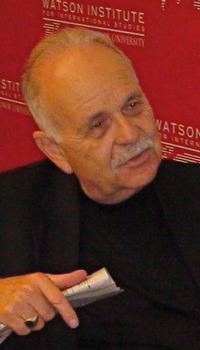 Stanley Fish made the campaign’s most audacious — also the most thoughtful — attribution of a certain aspect of divinity to Barack Obama. Fish was a Milton scholar before he became a culture warrior and, more recently, the New York Times’ “Think Again” blogger on the life of the mind, on campus and off. When Doctor Fish pictured the taunting John McCain and the imperturbable Barack Obama as a version of Satan’s contest with Jesus, he was drawing on Milton’s Paradise Regained — “a four-book poem in which a very busy and agitated Satan dances around a preternaturally still Jesus until, driven half-crazy by the response he’s not getting, the arch-rebel (i.e. maverick) loses it… The power Jesus generates,” in Fish’s reading “is the power of not moving from the still center of his being and refusing to step into an arena of action defined by his opponent. So it is with Obama, who barely exerts himself and absorbs attack after attack, each of which, rather than wounding him, leaves him stronger. It’s rope-a-dope on a grand scale… Jesus is usually the political model for Republicans, but this time his brand of passive, patient leadership is being channeled by a Democrat.”

We are talking in this election-day conversation about what feels already like a redemptive example and a profound turn in the civic culture. Are we ready for a touch of what could also be called a Gandhian model of doing the public business? I am asking Stanley Fish about the Obama challenge to public intellectuals, and about the Obama effect on the American “narrative.” Fish speaks as a Hillary Clinton Democrat who’s ready to make a considered and very large leap of faith.

SF: There will be, I believe, a three to six month period, which we can call a window of opportunity. By that I mean: countries around the world — some allies, some neutral, some our adversaries — will think there is a new opportunity for conversation and an opening up of old questions. So that is one part of the equation, the other part of the equation, if I’m right, is the response of the Obama administration is able to make.

In the Middle East, Latin America, Russia and Africa, there will be an opportunity for the United States, especially for the Obama administration, to start talking with people in ways that might lead to concrete resolutions, not tomorrow but down a road that has a discernable end.

I just heard this morning that Hugo Chavez, who is anticipating an Obama victory, said that he would be happy to sit down with the new American president and see what areas of compatibility and mutual self-interest we might identify so that we may no longer have to think of our two countries existing in an adversarial relationship.

CL: It’s remarkable. When Ahmadinejad calls then you know something has really happened.

SF: It is remarkable. If a bunch of things like that happen, and the administration has the savvy to take advantage of it, then I think we’ll see remarkable changes…