Stephen Burt makes you think of Samuel Johnson and also “The Simpsons.” If Harold Bloom were a precocious thirty-something again, if he loved science fiction and underground rock ‘n’ roll, if he wrote for American newspapers as well as the great London reviews, if he kept blogs on contemporary poetry and separately on his family life, mightn’t he sound something like this? Tenured and popular at Harvard, boyish Steve Burt seems to have read and formed a strong opinion on everything in print, in the same way Alex Ross of the New Yorker and The Rest is Noise seems to have heard and pronounced on every measure of music. Burt also writes a lot of poetry — a lot of it playful, like Kermit the Frog’s “Self Portrait as Felt Amphibian,” but aiming also at a civic note, even a political vision as poets like Yeats and Lowell once did. In conversation at the Grolier Poetry Book Shop in Harvard Square, Steve Burt called his own sensibility more “modern” than “post-modern.” It’s the modernist attitude, he says, that “if we read well enough, if we make our art good enough” we might yet resolve some of the fear and disquiet of our times. 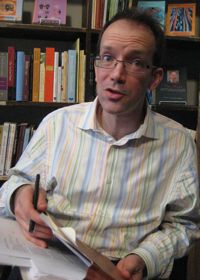 Q: Who is your all time favorite character in fiction?

A: Can I give you a list of finalists? Clarissa Dalloway. The older women in James Tiptree’s Brightness Falls from the Air. The computer programmer in Richard Powers’ Galatea 2.2. Barry in Lorrie Moore’s Frog Hospital. Dorothea Casaubon née Brooke is quite hard to forget when you’ve read Middlemarch. Theophrastus Such, the wiser-than-you voice of George Eliot in her essays.

Q: Which three poems would you take to a desert island?

A: “Sphere” by A.R. Ammons. “Paradise Lost” and I hope it would come with “Paradise Regained.” John Ashbery’s “Three Poems.”

Q: What is the talent you’d most love to have that you don’t, yet?

A: I would like to be a competent rock drummer. Peter Prescott from the Volcano Suns, maybe.

Q: Who is doing Steve Burt’s work in another medium, perhaps in another century entirely?

A: I am the last person who would know… I’d want people to see a man writing poems that are clearly unlike one another and yet are all thoughtful and all sound like him.

Q: When you walk down the street who do people think you are?

A: Someone who is picking up his little guy. Someone who has either a three and a half year old next to me or a backpack full of books.

Q: What quality do you love in a poem?

A: Abandon, wild nuttiness, something that’s not already been done. Helen Vendler reminds you that poems want to be unklike one another.

Stephen’s new book of poems is Parallel Play; he has published two other volumes, Close Calls with Nonsense and The Forms of Youth.