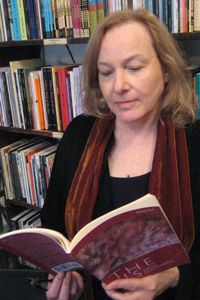 Joan Houlihan has rebuilt a poetry nest in Concord, Massachusetts — home of the “American Renaissance” of Emerson, Thoreau, Alcott & Co. in the 1850s, the town where, in Susan Cheever’s line, “most of American Literature was written in three houses over a period of five years.” On the chance lightning could strike twice, Joan Houlihan founded The Concord Poetry Center to nurture a big open network of writers at many stages of growth. Joan has been a passionate critic of poetry criticism — of what seems to her more like blurbs and fans’ notes, a manifold failure to arbitrate the landscape of contemporary poetry. Joan teaches in MFA programs at Lesley University, in Boston, and at Columbia in New York. She reads to us here from her latest book of poems, The Us, a public epic for our times.

Q: The poetry that got you into the game?

A: “The Lovesong of J. Alfred Prufrock.” The sound of Gerard Manley Hopkins, both poet and priest. A lot of my ‘poetic learning’ came from parochial school — in the form of ritual and song and psalm and parable and story — all very useful, after the religious part. That Hopkins was so talented and had such a voice and could also be a priest was a puzzle that interested me — the power of voice and music. I am interested in the ear and sound, in sonic textures.

Also Sylvia Plath & Emily Dickinson. These women poets gave me a way to be part of the poetry pantheon. Up until then, reading prescribed literature, I saw it as male oriented kind of life. In other words, something that I saw as not related to me.

A: A reader going into a bookstore and pulling down a book of poetry could try five times and come up with five very different ways of approaching the art.

A: A sweeping sense of humanity. I love a great poem, a poem that works on so many levels you never tire of it. A poem you can revisit and re-experience.

A: I’ve always had a kinship with the absurdist playwrights: Pinter, Albee and Beckett were a huge influence on me and my work.

A: Musical ability would be neat.

A: A need to see things as clearly and honestly as possible. I like the reality of things.

Q: What do you learn from teaching?

I learn that the drive to be a poet is primal. The voice of youth in this art is through song. My sons listen to music. I like Coldplay. Young people see the poem-in-a-book as an artifact.