Listen fast, podcast people, because the beloved artist-satirist-global muckraker Molly Crabapple talks fast, the same way she draws and paints a sort of carnival of conflict out there: in Syria, in storm-damaged Puerto Rico, in New York City. Molly Crabapple was a naked model and café / cabaret ornament in Lower Manhattan before OCCUPY landed on her doorstep in 2011. In the turmoil she invented a new career that’s made her famous, illustrating rough places in the real world. With her color tubes and razor-sharp pen nibs, Molly finds the trouble and sends back hand-made images for a visual culture that’s overdosed on video.  Her new book, with the writer Marwan Hisham, is Brothers of the Gun: A Memoir of the Syrian War. To block the view of snipers positioned just a few hundred meters away in the neighboring Masharqah, rebels and locals placed charred buses in between buildings in the entrances to the Bustan Al-Qasr battlefronts. Illustration by Molly Crabapple The front lines in Bustan Al-Qasr. In the background, regime-held Al-Iza’a neighborhood where snipers from both sides cover the area. Buildings at firing range are still inhabited by civilians. Illustration by Molly Crabapple Molly Crabapple posing with her portrait. photo and illustration by Susan Coyne 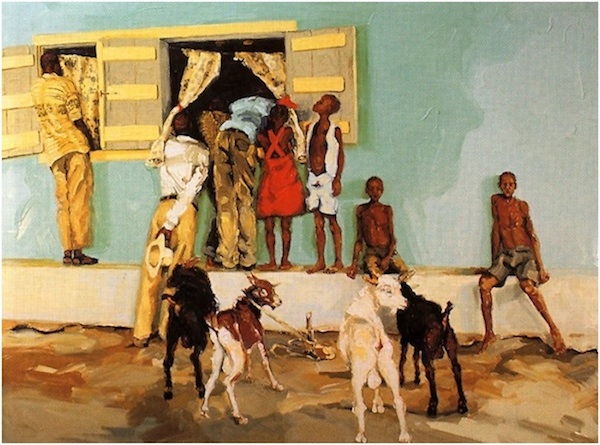 “Looking in” by Marilène Phipps-Kettlewell is an oil almost six feet wide, in the collection of Partners in Health.

Marilène Phipps-Kettlewell is a Haitian-American artist in prose, paint and poetry. She speaks to us a poem about the January earthquake, in which the sky, it seemed, let go of the Christ statue that had looked over her childhood; God let go of his son’s hand as the roofs of Port-Au-Prince collapsed on her city.

Marilene Phipps Kettlewell is a visual artist, too, celebrated for her brilliant impressions of Haiti’s street life, its voodoo temples, its spirit life.

And then, in a spooky coincidence, on the very day of the earthquake, January 12, she got the news that her book of Haiti stories, titled “Company of Heaven,” had won the University of Iowa award for short fiction. 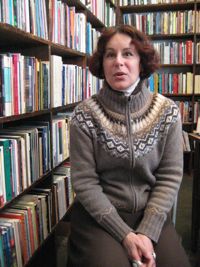 She is telling us about a large landscape of memory and imagination — no small part of what the earthquake smashed. Her poem “Man Nini” is a glimpse of the Haiti of her childhood:

Man Nini was queen of the coal kitchen,

in front of four pits glowing with embers,

the yellow kernels of her smile at the chickens

flapping in the loose ashes below, strung

together by the feet with sisal,

their furious claws resembling the old

people’s toe nails. She sighed as she sat

on a low straw chair, the heat-lacquered

columns of her black legs folded in a squat,

her soiled apron caught between her knees

forming a valley just below the wrinkled

mound of the belly, to sort out

peas, the good, the diseased, though all

grew round together in the same pod.

When she took off the flowered scarf she wore,

with traced avenues on her scalp that

of Kenskoff Mountain in soft fog. The remnants

of frizzy white down were gathered

which, in the darkness of the windowless

of her ancestors’ will-o’-the-wisps, filled

with murmurs about the secrets of her strength,

joy, and the sweetness of the food she cooked.

This is the third in a group of conversations with poets, word-artists, about a catastrophe beyond words: the earthquake in Haiti this January. Thanks to the Grolier Poetry Book Store in Harvard Square, Cambridge for studio space. Tomorrow, performance poet Eli Marienthal.