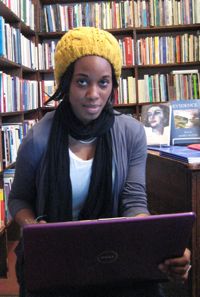 Fabienne Casseus is a 17-year-old poet of young Haiti, broken Haiti, corpse-like Haiti, where she witnesses that a strong heart is still beating. Fabienne is a senior at a pilot public high school in Boston, “Another Course to College.” She came to the States with her mother at age 9, and has been writing — mostly poetry — ever since.

Fabienne’s Haiti is “who you are,” an island that people leave but never get away from, she says, a state of mind strong and rich in language, culture, and history.

What I’ve chosen to do when it comes to the earthquake and writing about it is: I look at Haiti as a woman, basically, that’s been broken. Reading throughout the history, I consider Haiti as a raped country. I consider her as somebody that’s been stolen from so many times that eventually her land is just tired. The earthquake is just her exploding from being manipulated and used for too long, and being pacified for too long.

I’ve started writing many different pieces where I speak of Haiti as a person: she’s a woman and she’s going through turmoil and she’s going through heartbreak. I don’t see it as something that’s ugly. I see pain as something that’s actually very beautiful, and I see the earthquake as a way for her to just cleanse herself and to remind people of who she is, to speak about the fact that she’s there, and she’s not just an isolated island in the world. She has something to say.

The attention is negative, but I feel that this is a way for her to speak and remind people that Haiti is strong, and Haiti is here, and Haiti’s been going through a lot and this is not the beginning or the end of it.

This is the fifth conversation in a series with Haiti-minded artists since the catastrophic earthquake in January. Link to the others here.