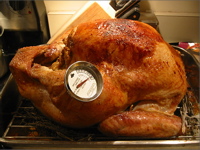 Anyone who listens to public radio surely knows what Susan Stamberg is making for Thanksgiving dinner. What we want to do, the day before Thanksgiving, is air out the airwaves with some new recipes, new meals, new ways in which we can prepare our holiday bird. (The consensus around the office is that the Turduken is so

Instead of turning to cookbooks and celebrity chefs we‘re going to turn to a fresher, more fertile field: the Internet. The Internet offers thousands of fantastic food blogs that range from high-end cuisine to lowbrow chow.

If you have a favorite food blogger who should be on this show, please post your suggestions. And don’t hold back on your Thanksgiving menu; share your recipes, traditions and help us define what kind of Turkey will be so 2005.

Jim Leff didn’t know it at the time but he actually wrote one of the first food blogs What Jim Had for Dinner. This is now part of his popular website, known as the Zagat guide of the 21st century, www.Chowhound.com. Leff is a food critic who has eaten everything from every corner of the world. Tonight Jim Leff will be the surrogate for those of us who never cook on Thanksgiving but do a lot of feasting.

Guy Prince is known on the web as Dr. Biggles. He blogs about all things meat on MeatHenge.

Julie blogs from her home in Spanish Harlem. You can look at her Thanksgiving recipes at A Finger in Every Pie.

Podchef, a food podcaster (via bicyclemark, who calls him one of the hardest-working chefs in the podosphere)