I don’t think there’s much that the US can and should do about the existence of these talks shows other than welcome them and get our own representatives on as often as they’ll have us so that we can take part in the conversation. 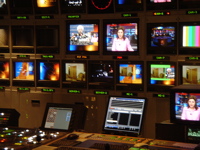 When the satellite-TV channel al-Jazeera started broadcasting from Qatar in 1996, it revolutionized Arab media with its uncensored political talk shows and news coverage. Until al-Jazeera, media in the Arab world was limited to state-run papers & TV channels and a few transnational papers (all but one owned by the Saudis) printed in Europe. Any kind of open political conversation was hard to find. Al-Jazeera shook thing up by bringing democratic debate to the Middle East long before the U.S. invaded Iraq. Other alternative Arabic news outlets have since cropped up — with varying degrees of political independence — taking their cues from al-Jazeera and continuing to broaden discussion, but al-Jazeera remains the most popular and probably the most trusted.

So here’s the question: if al-Jazeera is a good measure of how the Arab world talks to itself — about itself and about us — shouldn’t we be listening? Very carefully?

The U.S. government seemed to encourage al-Jazeera until 9/11 and our invasion of Afghanistan, when Uncle Sam began accusing the channel of spreading terrorist propaganda. Wouldn’t it be a good idea to figure out whether al-Jazeera really does veer into sensationalist or biased journalism (a good question to ask ourselves about our own media, too) or whether it presents an uncomfortable but valid alternative viewpoint?

Among other things: How did it cover the recent Palestinian elections? What is it saying about nuclear rumblings in Iran? What did it say and show about our invasion of Iraq? Has it had anything to do with fanning the Danish cartoon flames in the last week?

Thanks to praktike for suggesting Marc Lynch.

Thanks to to Bob Katz for emailing us this afternoon to suggest Abderrahim Foukara.

The Optics of This War

Click to Listen to the Show (24 MB MP3) The Lebanon crisis could never be contained – even if the war does not physically spread to Iran or Syria, the images...

Click to Listen to the Show (24 MB MP3) Hamas is trapped. They have an agenda, but they never dreamed to be in full power. Now, Fateh pushed them in...