2006 has been a big year for big birthdays. We started the season with Mozart’s 250th and Beckett’s 100th — now it’s time to honor the young’uns. This year Queen Elizabeth II, Hugh Hefner and Fidel Castro turn 80 — as do Alan Greenspan, Jerry Lewis and Cloris Leachman. But there is something remarkable about the Windsor-Hefner-Castro triumvirate. Each one of them came to power nearly 50 years ago and they each did their part to define the second half of the 20th century…they continue to thrive in the 21st. So come raise a glass and join us at the intersection of Monarchism, Hedonism and Communism.

At Open Source we can’t afford to hire an event planner so we turn to you to help us come up with a guest list. Who do you think we should invite to commemorate this trio?

A NOTE FROM GRANT MCCRACKEN 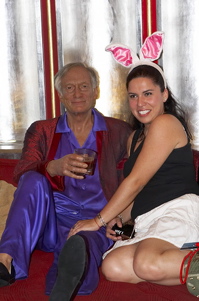 Whenever we do a show that encompases history, economics, cultural trends, etc., we turn to blogger Grant McCracken. When pulling this show together we asked for his thoughts on the Windsor-Castro-Hefner triumvirate

Hefner, Castro and Elizabeth II have not quite outlived their claims to credibility but they are cutting it very, very fine.

Normally, people who don’t change are punished with accusations of self parody. But there is a more particular problem. Each of them have built their standing on shifting sands. They are actually outliving the ideology that brought them to power.

In a world ruled (more or less) by meritocracy, monarchies look increasingly odd.

In a world ruled (more or less) by the creativity of crowds (and mass cultural invention), those who claim to be inventors of lifestyle look increasingly implausible. And let’s face it, the blondes don’t help.

In a world ruled by dynamism, those who claim power through command economies and command cultures look entirely dubious.

Grant McCracken, Blogger and Research Affiliate in the Comparative Media Studies at MIT

Click to Listen to interview with Grant McCracken (1.2 MB MP3)

Mateo, Hugh Hefner Celebrates His Birthday Whenever He Feels, Useless Things, May 25 2006.

Attention Historians of the Future

24 MB MP3 Chris’s Billboard Surely you’ve wondered: what is it from the flotsam and jetsam of our everyday lives that’s going to reveal us to the archaeologists of 3005. Our...