The Case for Ned Lamont

The Case for Ned Lamont 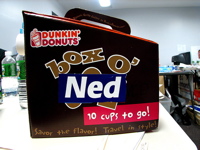 Many people are clearly ready for a change [kimyo/flickr]

In the wake of Ned Lamont’s defeat of Senator Joe Lieberman in the Connecticut Democratic Primary, we got in touch with listeners in the Nutmeg State. Their responses are far from a statistical sample, but they do offer insight into the large part of the electorate that opted for an anti-war businessman rather than a moderate, 18-year-veteran of the Senate.

Bryan McKay of Branford, who blogs at Les Faits de la Fiction, could have registered to vote in Massachusetts, where he is a student.

I registered as a Democrat with the sole purpose of being able to vote in this primary. My own politics typically fall to the left of the increasingly centrist Democratic party, but after growing up with Lieberman, I knew that he had to go. … Needless to say, I voted for Lamont.

I actually found it very surprising how much national attention this election got. Lieberman’s voice only counts for one percent of the Senate, but it was clearly a bigger issue than that. I think this might signal a real sea change in the Democratic party. I’d like to see it signal a sea change in politics in general. We can’t have incumbents sitting in Congress for eighteen years when they no longer represent their constituents. That was my biggest problem with Lieberman. He talked about how he was doing what he thought was right and he made a big deal about personal integrity, but ultimately the goal of a politician should be to serve his constituency. This primary showed us that he clearly wasn’t doing his job anymore. The six-year term limit seems too long as it is. He’s been Senator for almost as long as I’ve been alive, and he’s only had to campaign three times to get there. A lot can change in six years, and a lot clearly has.

I think the reason we have three branches of government is that there should be checks and balances. I think we’re getting far away from that. The Bush administration and its arrogance is getting out of control. I’m dumbfounded that people are taken in by half of the stuff they do.

I was particularly ticked off by that one quote of [Lieberman’s], when he said that there should be no dissenting voice against the president during a time of war…whatever he said. Especially in this current situation, we could be lied into a war…there is no dissention, there is a huge rubber stamp in congress. I would be very happy to see something else there, a little more of a voice of the people. If Lieberman had been paying attention to the voice of the state, he’d still be in office. He has been a good senator, a good statesman in a way, but he’s sort of lost his loyalty to the voters of this state by not being aware of what is going on in people’s minds.

David Kluskiewicz lives in West Hartford. He works in marketing and thinks highly of Lamont’s background in business.

It’s good, the way he comes off when he speaks, he doesn’t know all the answers. Those are things that I see in him that may be intangible…that show some promise. It is less talking head, more asking tough questions.

I see it resonating across the country, that this is a shot across the bow that it isn’t ok to be a career politician. You have to bring new ideas to the table. [The potential of fracture] makes me really discouraged with the Democratic party. … What I would hope is that [Lieberman] would say, “What I was doing may not have been right. I need to help my party.” It seems terribly wasteful. I am optimistic, I’ve looked at blogs and stuff, and I see what is happening in other places. it is great to have this community conversation.

David Kluskiewicz, in a phone call with Open Source, 8/9/06

You have to say that it is a big thing to want to take a senior senator out, because the accumulated seniority really matters. Just look at Senator Byrd and what he has done for West Virginia. I heard a comment this morning saying that around here, a big thing is keeping the sub base in New London open, having the wherewithal to demand that the Navy stay in place. That is something an 18-year veteran in the Senate would have more juice to do. You have to make that decision, you don’t make that decision lightly, to get rid of a guy. I have a 19-year-old son. We have no draft, but the idea of putting our children in this civil war [in Iraq] and letting it continue is outragous to me.

As for the November election, well, it would be a lie to say I’m not worried. The same polls that showed Lamont winning the primary showed Lieberman taking a substantial victory in the event of a three-way race. Hopefully someone talks some sense into him before that happens though. I know the big Democrats who supported Lieberman are going to start backing Lamont. I wouldn’t be surprised if Clinton hasn’t already been on the phone with him, trying to talk some sense. This is just going to splinter the party at a time when we need to be cohesive on these issues. We don’t all need to agree on everything, we don’t all need to toe the party line, but we need to work to win back Congress. In last night’s concession speech, Lieberman said that he’d be running as an “independent Democrat.” But that doesn’t even make sense. The Democrats made it clear last night that they want to field a fresh candidate. The Democrats chose Lieberman, and now Lieberman is choosing to break ties. Trying to hold onto that with a phrase like “independent Democrat” is disingenuous, and it denies the fact that his Democratic constituents have made a different choice.

The Case for Lieberman

Yesterday, we reached out to listeners in Connecticut to get a reaction to Ned Lamont’s primary victory over Joe Lieberman. We heard back from three Lamont supporters in the afternoon....

The Meaning of Connecticut

Click to Listen to the Show (24 MB MP3) Upon the revelation yesterday of a large-scale bombing plot in London, coming as it did two days after Ned Lamont’s defeat of...