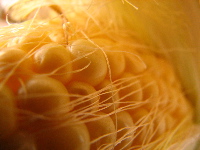 [Booked for Wednesday, May 10]

In our recent immigration show, our guests noted that thousands of illegal Mexican immigrants are crossing into the U.S. because following the NAFTA agreement cheap — read subsidized — American corn has flooded the Mexican market. These one-time farmers just can’t compete against U.S. corn on their soil, so they often end up picking fruit on ours.

It’s one of many unintended consequences that follow from cheap corn, and it got us talking that night in the control room. We realized that corn (or corn subsidies) is one of those topics that often comes up in odd contexts. When you think you’re talking about illegal immigration, or diabetes, or energy policy, or environmental degradation, or presidential politics, it turns out that you’re also, and often inevitably, talking about corn.

So we’d like to try the reverse: start with corn itself and see where it leads us.

Author, The Omnivore’s Dilemma and The Botany of Desire, among others

Author, Cronies and Pipe Dreams, among others