The Cleanest Street in North America

The Cleanest Street in North America 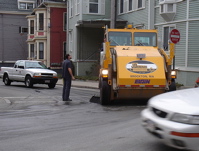 Lest you think we only talk about serious things in our daily story meeting, we give you this, the story of the Street Sweeper. I think it was David who said it first: “That’s the 7th time that thing’s cleaned that street this morning. It’s been doing that for the last few days.??? This was one morning not long ago when we’d pulled our chairs (or a patch of floor) into a circle around a non-existent table to talk about upcoming shows.

The next day, Chris (who was perfectly positioned in the circle to stare out the window down the very clean street) said, “There it is again.??? It has this way of laboring slowly and spinning its brushes rather ineffectually up the middle of the road. Over and over. It never cleans the gutters. 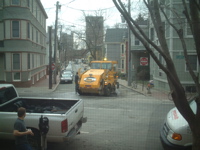 In which Brendan photographs David talking to the Sweeper [Katherine Bidwell]

After it circled the block a few more times, we began to guess. “It’s a zamboni that’s lost it’s way!??? “It’s the personal vehicle of someone who lives on that street!??? In the end, David leapt up, yellow legal pad still in hand, and ran out to ask the driver why he was doing what he was doing. Turns out trucks are moving dirt around for a construction site nearby, and the street sweeper’s been hired to clean up after them. We think it’s a bit of a scam, but in the meantime that zamboni-thing has become a kind of comforting yellow beacon in our otherwise very teal/turquoise office lives.

Mary just got back from vacation, and it turns out that her all-women’s hockey team is called the Amazambonis. Convergence? We think so.

24 MB MP3 Chris’s Billboard The back of a taxi cab is as good a view as some of us get of the globalized workforce today. So what are we learning...

What now? [Samgr / Flickr] Nearly a month ago, I announced my plan to build a theremin in preparation for our upcoming show. Since then, construction has been held up a...