The Dark Pages: An hour of radio dedicated to the graphic novel

The Dark Pages: An hour of radio dedicated to the graphic novel 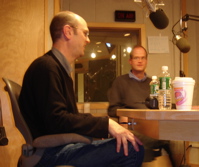 Charles Burns and Chris Ware in the studio [Brendan Greeley ]

The funny pages always have a handful of comics that are without comedy. Mary Worth, Gasoline Alley, Dick Tracy and Apartment 3-G are among the serious serials. These were the adult comics of the 50’s, then came the 60’s.… comics, like everything else, went underground.

Underground, cartoonists such as R. Crumb, Greg Irons, and Jay Lynch, were writing about sex, drugs, and violence. For this reason, the new comics became known as “comix” to set them apart from mainstream comics and to emphasize the “x” for x-rated.

In the early 90’s the underground scene got an upgrade when Art Spiegleman received a Pulitzer Prize for Maus, an illustrated narrative of Holocaust survival. Maus gave birth to the genre and there have been numerous graphic novels that have been documenting the dark side ever since. Whether it’s the Bosnian war or the aggressive banality of the everyday, the graphic novel has revealed itself to be an exquisitely effective medium for portraying physical, psychic and emotional devastation.

What we’ll be discussing this hour is why. Is it the immediacy? Is it the interplay of the visuals and text, which can range from sublime harmony to utter dissonance? Is the graphic novel a cerebral experience or does it bypass that cortex and go straight to the gut?

What are you favorite comix/comics? Do you think this is an effective medium for documenting all things dark?

Mazen Kerbaj, a Lebanese musician and comics artist, lives in Beirut; last week a friend put us in touch with him through one of Mazen’s bandmates here in Boston. Every...

Generally we’re in desperate need of some graphic design help on the site; specifically right now we’re looking for a banner, something roughly 150×75 pixels, that will send people to...