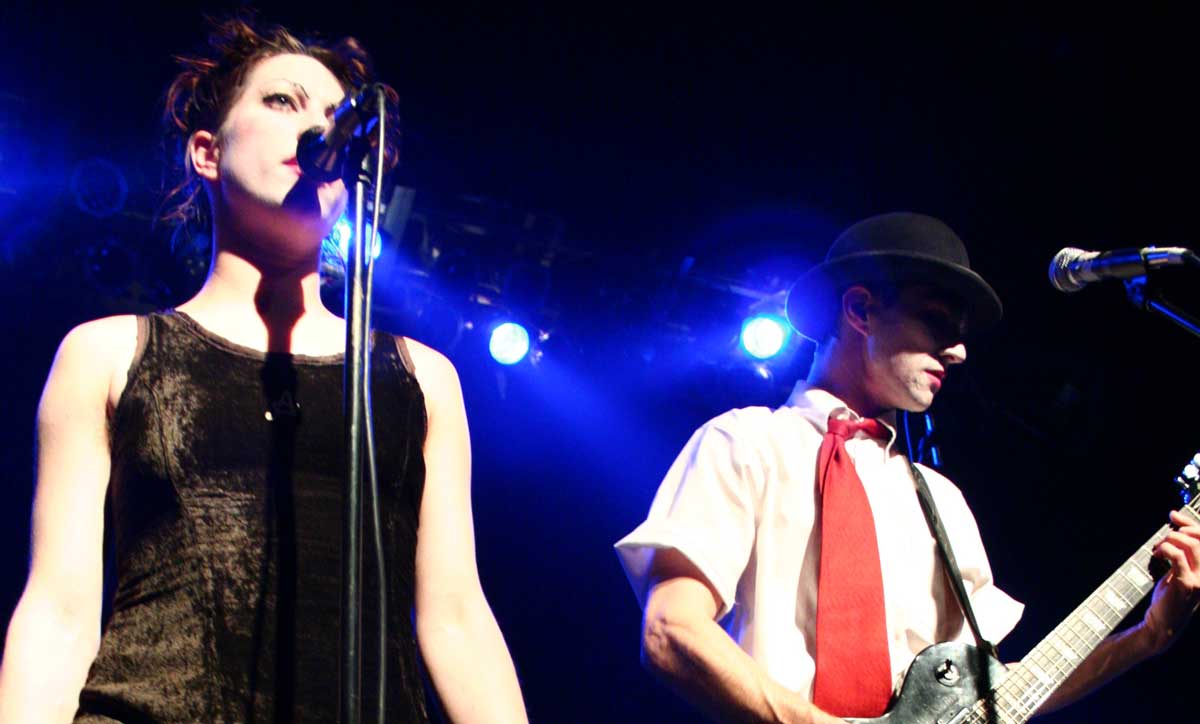 "'Goth,' 'punk'—all those words are suggestive, but they don't trap us."

We’re trying something new. A live band in our studio, playing songs and talking. The band is The Dresden Dolls, a self-described Brechtian-rock cabaret duo with a flare for the melodramatic. The band is comprised of Boston natives Amanda Palmer singing and pounding her heart out on a big Kurtzweil keyboard, and Brian Viglione behind the drums. Their music has a kind of literary fury to it, and their fan base culls from the subcultures of goth and indie rock. As far as contemporary underground music goes, the Dolls are pretty unique.

The band first came to our attention after Amanda penned a song called “Christopher Lydon.” (Lyrics here.) It focuses on Chris, then the host of The Connection, as a kind of love interest. Believe me, it’s weirder for us than it is for you.

So the Dolls will be on our show and they’ll play some songs and we’ll talk. But what, dear listeners, should we talk to them about? And who else should we invite on to talk with them? We’d like to hear from their fans, about why they love this band so much, and from people who love cabaret or contemporary music, and anyone else with ideas of how to structure this show and make it feel Open Source.

I’m so glad you’re featuring the Dresden Dolls – they really are incredible, and one of the best shows I’ve seen in a long time.

I guess I’d love to know more about their collaboration. I understand Amanda is the main songwriter, but I’d love to know more about their process of working together, both in writing, and preparing their show. I think what struck me hardest about them is the depth of the way they almost seemed like a male/female mobius strip of the same performative entity, and there is an incredible give and take between them when they play that’s so strikingly sexy and inspired. Amanda leads the the verbal charge, but Brian punctuates her every word with such a brilliant blend of sensitivity and raw power. They are each, by turns, humble and dominating, focal point and support. I really, really loved their performance.

I’m not sure that makes a damned bit of sense, but it was seriously beautiful and also fascinating.

Check out the Dresden Dolls’ blog. They’re in the studio right now recording their second album, and at the moment Amanda is writing extensively about it. And about how she’s not a hippie.

Here are some more great questions from passionate Dolls fan Brandon Cirillo of Oxford, Ohio. Brandon blogs at Once More, With Feeling, and apparently, we made his day.

I’m really curious as to whether you have any kind of pre-show ritual. Are there certain things you like to do before going live? Any sort of dancing, singing, drinking done? I’m sure when I see you guys in Columbus it would add that much more to the show haha. Do you like to take a peek at the audience before going up? Do you ever wander around the venue beforehand and randomly talk to people that are waiting to listen to you? What is your relationship like with other bands you perform with…beit the headliner if you are opener, or with the openers when you are headlining?

One more thing I’m fairly curious…how do you feel now that you’re getting more popular? I’m not going to lie, I get kind of disappointed when I tell people that I’m listening to The Dresden Dolls, and they actually recognize you guys or have heard you on the radio. Maybe that’s silly, of course I wish upon you the greatest of success, but there’s so much more sexiness and mystery listening to a group that other people haven’t really heard of. I can’t get the joy of spreading your music if other people have already heard it and are familiar with it! But this is all just for selfish reasons…I am curious though as to whether becoming TOO popular might be a concern for you…for some people it seems to be.

Brandon Cirillo, in an email to OS

Also: thanks again to Chris Williams for recommending Steve Gisslebrecht as a possible guest for this show. Based on Chris’s recommendation, Steve will join us on the show to talk about the 35 separate Dresden Dolls shows he’s seen and what makes the band so special. He’s giving up going to the Haruki Murakami lecture at MIT to be with us, so we really appreciate it!

Chris is deep into preparing for the Sonny Rollins show. He says the DOV (definition of victory) is to get him into a solo, expressive, relaxed, intense conversation about music....