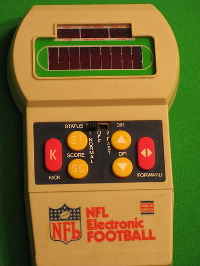 The “Small Ball Theory,” George Plimpton’s notion that the quality of writing about a particular sport is inversely proportional to the size of that sport’s ball, has always been given a generous hearing in our office. This is a baseball kind of place, basically, with a sideline in golf. Any ball that’s larger than a fist — or oddly shaped — doesn’t get much attention in the confabs before our story meetings… or column inches on our bedside tables.

But when Michael Lewis, he of Moneyball and Coach stardom, started turning his attention away from the diamond and toward the gridiron, the Plimpton line morphed from truism to canard. First came a number of newspaper pieces, including a fascinating New York Times profile of Texas Tech coach Mike Leach. And now we have The Blind Side, which prompted Malcom Gladwell to wonder if we’re enjoying a golden age of sportswriting right now.

If this is a Golden Age with two kings (Gladwell argues for three), Bill Simmons is the fan with unlimited and often hilarious cultural references who situates sports in our particular mytho-pop moment. And Michael Lewis is the humane explainer with masterful narratives who is able to situate sports (and sports figures)… well, just about everywhere else. In his latest book, which is ostensibly about football, he touches on religion, class, NCAA rules, education, gender, and — everywhere and in everything — race.

But it’s also about, as the subtitle tells us, the “evolution of the game:” football’s transformation from a running sport to a passing sport, and the subtle and not so subtle changes that follow. It’s about two Bills — Walsh and Parcells — and the ultimate distillation of an unfinished argument about brains versus brawn. It’s about the impact one man — in this case Lawrence Taylor — can have on an entire sport. And it’s about a newly vital position that rose in importance in tandem with the quarterback.

Which is more than enough for an hour of radio. We’ll be focusing on the evolution as Lewis sees it, and on the game as it stands now. So step right up. Football fans, what are you paying attention to this season? What’s your version of its evolution? Football haters: what, if anything, would make you tune in?

Author, The Blind Side, Moneyball, and Coach

Mike Reiss, A week inside the mind of the Patriots, The Boston Globe, October 8, 2006: “When Bill Belichick puts on his headset and starts pacing the sideline today, 10 days of preparation will begin to unfold in front of him.”

Len Pasquarelli, West Coast Offense; the neophyte’s guide, ESPN, October 17, 2004: “Were the history of the West Coast offense to be penned in Biblical style, it would certainly be heavy into “begats,” an archaic verb but one appropriate to describe the lineage of a popular design used by a preponderance of NFL coaches and coordinators.”