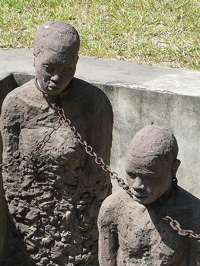 A memorial in the former slave market of Zanzibar, Tanzania, where over a million slaves were traded between 1811 and 1873. [Patrick/Flickr]

Ghanaian poet and scholar Kwadwo Opoku-Agyemang calls slavery “the living wound under the patchwork of scars.” Alternately spotlighted and ignored on both sides of the Atlantic, slavery is still the bedrock of modern race relations in the U.S., and the starting point for every conversation about race and class.

The scar covered wound is an apt metaphor for how we tell our history: some things get remembered, some don’t, some pieces get canonized and some pieces get lost. Most people don’t remember, for example, the Maroons – escaped first generation slaves who led guerilla attacks against the British in Jamaica. Nor do most people remember the strange triangulation between black slaves, American patriots, and the British during the Revolutionary War.

Now many new histories are re-examining what we think we already know about a period of time when the Founding Fathers were hashing out the inalienable rights of man, while inscribing the 3/5 personhood of blacks into the Constitution.

In this show we’ll parse some of the hidden, lost, buried, ignored, forgotten, and suppressed stories and histories of slavery. What pieces got left out of the canon of American history? And why? And what does it mean now to unearth them?

Our main shepherd will be British-born uber-historian Simon Schama, the author of one of these new histories. An 11 on our 1-to-10 scale of good talkers, Schama has, as one review put it, “gained a reputation for challenging established notions of history and culture.” He says we’re only now starting to understand slavery as an integral part of every aspect of American history. Not just a story in and of itself, but part and parcel of the very foundation and conception of the country.

Leave your questions here, and reminders of the stories we’ve lost or ignored.

Author, Rough Crossing: Britain, the Slaves, and the American Revolution

Consultant in human rights and elections in the Balkans, Haiti, Latin America, and the Caribbean

Adele Oltman, The Hidden History of Slavery in New York, The Nation, October 24, 2005

Kara Walker, After the Deluge, documentation and audio from her current show at The Metropolitan Museum of Art, New York 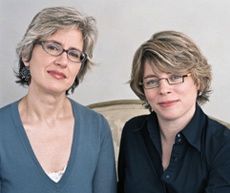