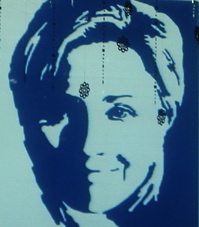 What do you see in this picture? [Lisa E / Flickr]

This is what Jack Hitt calls the Hillary Rorshach Test, a phrase that apparently originates with Hillary herself. Hitt argues that what’s interesting is not what our intense reactions to Hillary tell us about her, but what they tell us about ourselves.

The details of her life are familiar enough; perhaps that’s why all the profiles of her over the last 10 years have always seemed tedious and repetitive. It’s how we shape those facts that’s interesting…

Hillary is an avatar of an existential dread skulking in the hearts of every couple who’ve tried to put together a life since the feminist revolution. This anxiety explains why the darkest question a liberal feminist can ask is: Why didn’t she leave that son of a bitch? And it’s why the coarsest question a conservative man can ask is: Who would do the bitch? Both point to deep fears that emerged alongside feminism, grounded, as every question since that revolution is, in the politics of the bedroom.

As Hillary prepares to seek the nation’s highest office – an office she once had not one but two offices next door to – we’re asking: does Hillary tell us more about what we still expect of our wives and mothers than what we expect of our leaders? Is how much we love and hate her really that much different from the kind of intense love and loathing we feel for other public figures, like say, her husband? Why do we hate her more than we hate Nancy Pelosi, or Barbara Boxer, or, I don’t know, Carly Fiorina? How will the ’08 race change the Rorschach calculus, and how will that calculus change the ’08 race?

Turns out that Hillary is just as incendiary as we suspected. This show post inspired a spirited debate over the weekend, which prompted Jack Hitt to respond:

I agree that yet one more discussion of how the media always comment on a high-profile women’s looks is tiresome. But I want to argue that Americans critique Hillary Clinton in a way that far transcends anything good or bad, political or personal, that gets said about Elizabeth Dole, Condoleezza Rice, Susan Collins or Mary Landrieu. It’s far more complicated with Clinton. I report the good side (Hillary has a hidden vote that supports her) and the bad (John McCain’s unforgiveable joke about Chelsea). All of this personal chatter points to one thing: that Clinton is still the trailblazer she was when she was the college valedictorian who infuriated the administration with her feminist address to the students, the first female law partner in Arkansas, the governor’s wife, the First Lady, the carpetbagging senator, and now presidential candidate. Sure, there were pioneers such as Margaret Chase Smith and Shirley Chisolm, but Clinton is the first candidate with a likely chance of winning.

Author, Get to Work

Earlier today we talked with Frank Marafiote, publisher of The Hillary Clinton Quarterly. Marafiote started the quarterly in 1992 after “awaking from a deep slumber induced by Ronald Regan and George H.W. Bush.”

OliverCranglesParrot, in a comment to Open Source, January 26, 2007: “What is this kind of discourse providing, either by this writer or by those more coarser, linguistic rapist flame throwers? I fail to see why this sort of imprudent rhetoric is so highly regarded. President Clinton and Senator Clinton do not have to answer for their domestic life as long as it’s within the legal principles of the larger culture.”

Baldrick, Hillary Clinton for President?, MyDD, January 23, 2007: “I know a lot of people hated “the Clintons” but Bill’s ratings are still quite favorable. So why do people hate Hillary so much? There are a lot of complex answers, but I don’t see how her being a woman doesn’t feature prominently in a number of them. What would be acceptable or normal behavior is scrutinized, criticized, and blown up because of who she is and WHAT she is.”

Challicechick, So why do people hate Hillary so much?, The ChaliceBlog, November 16, 2006: “I get that Hillary is some sort of symbol for bitchy women, but I don’t quite know what she’s actually done to earn that reputation, particularly since her personal life offers a good deal of evidence to the contrary.”

k. randolph, Hillary pt. 2 (Liabilities), Voter Vault, January 23, 2007: “Her image: Divider; 60s radical; Powerhungry; Cold; Uncharismatic. That’s not saying she deserves those images, but they linger . . . she is hated like no other candidate.”

Linda Hirshman, You’ve Come a Long Way, Maybe, The Washington Post, January 28, 2007: “All the gender gap talk notwithstanding, there’s no guarantee that Clinton would receive enough votes from women to be elected. I’ve studied women and women’s politics for 20 years, and if there’s one thing I know, it’s that, except for possibly once in 1996, female voters have not by themselves put anyone in the White House.”

Camille Paglia, The First Drag Queen, Salon, January 28, 1996: “Hillary — whom her Wellesley College classmates called “Sister Frigidaire” — was a natural as a lawyer, but she had to learn how to be a politician, where flexibility and gladhanding cordiality are crucial. Year by year in Arkansas, especially after Bill was defeated in his first reelection bid, Hillary, a high-achieving firstborn child with two recessive brothers, taught herself how to act like a woman. The smoothly efficient First Lady we see before us, with her chameleonlike blonde hairdos and charismatic smile, is actually a drag queen, the magnificent final product of a long process of self-transformation from butch to femme.”

Henry Louis Gates, Jr., Hating Hillary, The New Yorker, February 26, 1996: “At times, she herself sounds at a loss to explain the level of animosity toward her. “I apparently remind some people of their mother-in-law or their boss, or something,” she says.”

This distrust, even hatred, fear of women in the polity — either as citizens or as part of the government — goes all the way back to Aristotle, and it’s been a large part of our Western political thought.

A lot of men, when they want to denounce Hillary, they’ll tell you privately — and I got this all the time when I was researching this –- was that they wouldn’t “sleep with her.” It was a way of busting her back down to woman, and then rejecting her at that level.

Seeing the vagina dentata (and Hillary?) in a shark jawbone. [zombizi / Flickr] Writer Jack Hitt’s list of “our own private Hillarys” needs an additon: Hillary as vagina dentata. While researching The...

I do think it’s very important to understand that your congressman, and your boss, is just another guy whose wife is doing seventy percent of the housework. Linda Hershman on Open...