The History of Utopia

The History of Utopia 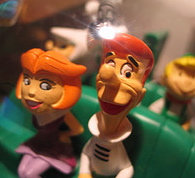 We spent a good chunk of our story meeting yesterday morning talking about Children of Men, which about half of us have seen. (If you haven’t seen it, go now. It’s relentless, brutal, and visually astounding — one of the most harrowing movies I’ve ever seen.) But beyond this particular imagining of the near future, we were more interested in the long history of Utopias (and dystopias, their evil twins) — and how they’ve always reminded us about our most urgent desires, dreams, fears, and obsessions. These stories are nothing new: from Eden and Plato to Swift and More, from Orwell to Skinner to Dick to Atwood, we’ve been imagining the best (and worst) of all possible worlds for a long, long time. And those imaginings have obviously changed a lot over time.

So what might a psychological history of the world look like if you mapped it not with what was, but with what we wished — or feared — could be? And when that history gets to the present, what is there to learn about our 21st century moment? Have you seen or read any of the recent dystopias — films like Children of Men or books like Cormac McCarthy’s The Road or Margaret Atwood’s Oryx and Crake? And what about grand old Utopian narratives? Are we too pessimistic — or too individualistic, or too busy, or too content — to craft or consume them today?

Associate Professor of English, Queens College/CUNY and The Graduate Center/CUNY

President, The Society for Utopian Studies

Professor of English, University of Texas at Arlington

Professor of English, University of Maine

Producer and Director, Visions of Utopia: Experiments in Sustainable Culture

Sutter, in a comment to Open Source, January 24, 2007: “Is the lesson of utopic and dystopic literature that the utopic lure of increased (or decreased) control can be tremendously powerful, but that shifts in either direction always carry great danger of abuse?”

silvio.rabioso, in a comment to Open Source, January 25, 2007: “‘Utopia’ only recent became a derogatory term; even in the early 20th century, people viewed and used the idea of utopia as a progressive concept in the struggles over how to shape society.”

joshua hendrickson, in a comment to Open Source, January 25, 2007: “A true dystopia is one where it isn’t even possible to hope for something better; you already believe it to be the best of all possible worlds.”

Celebration, Florida: “Take the best ideas from the most successful towns of yesterday and the technology of the new millennium, and synthesize them into a close-knit community that meets the needs of today’s families.”

Michael Taylor, Jones Captivated S.F.’s Liberal Elite, San Francisco Chronicle, November 12, 1998: “Before he became infamous for leading 913 people to their deaths in the Guyanese jungle, the Rev. Jim Jones was the darling of San Francisco’s liberal establishment — a man who could spread the wealth to all the fashionable charities and, at a moment’s notice, marshal thousands of followers for a good cause.”

Bryan Yager, Space Colony Art from the 1970s, NASA: “A couple of space colony summer studies were conducted at NASA Ames in the 1970s. Colonies housing about 10,000 people were designed. A number of artistic renderings of the concepts were made.”

Sabbath Day Lake Village, Learn About Maine’s Shaker Community: “Sabbathday Lake has never stopped being an active community, partly because the membership was never large and, its primary means of support in the 1900s, a dried herb industry, was manageable by a small number of farmers. Today the village has 7 members.”

From the beginning, the genre is just gloriously ambiguous, a sort of amazingly elaborate intellectual game between friends.

I would hate to draw too strong a line between the utopia and the dystopia, which is why I’m sort of struggling with the question. For example, I’m one of these people who reads 1984 hopefully, as a kind of negating of what we do not desire in order to get to what we do desire.

It was in part that a lot of the authors of that time were really confused and terrified by the rapid changes in America, the diversity. They wanted to kind of put things back together again, get everybody in one place. Kind of the opposite of the no-place of utopia.

[My college kids] say things like “a kegger that never runs dry” or “legal drinking at the age of 18.” Envisioning their perfect world as kind of a tropical paradise: spring break with endless partying and warm weather . . . But it’s very much an individualistic image of utopia — the 5,000 square-foot house with the fancy car in the garage — and doesn’t seem to have much of a collective dimension.

Twin Oaks, in Virginia, they were actually started by people who read B.F. Skinner’s book, the “Walden Two.” They tried out his ideas for a little bit, but pretty soon rejected them. They weren’t working in their daily life.

The dense and electric thread on the Hannah Arendt show is, as of now, nearing 240 comments. Here are some nuggets of wisdom pulled from the conversation: Claiming that evil is...

We’ve been watching a conversation on the Guttersnipe that seems important for the future of the community that’s growing around Open Source. A few of our regulars have been...