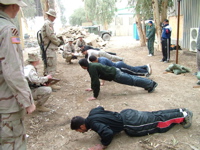 A strong Iraqi police force is one of the stated “pillars” of the Bush Administration’s Iraq strategy. It’s essential to the country’s stability — and therefore to any plans for U.S. troop withdrawal (about which rumors are heating up again).

So how is it that three years after the fall of Baghdad the police force is exhausted and ineffective — and seems in fact to be at the very root of the country’s simmering civil war? What went wrong and when? What did we learn from Bosnia and Kosovo (and countless other post-conflict countries) about basic law and order that we could have applied here? Why didn’t we do it? And what happens now?

Former national security advisor to the Iraqi Ministry of the Interior

Was involved in security sector reform in Kosovo

Stuck in the Pottery Barn

Click to Listen to the Show (24 MB MP3) Can we go home now? [Alive In Baghdad / Flickr] Barry Posen (right) in the studio with Chris [Brendan Greeley] So we’re...