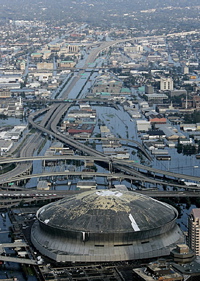 Later this afternoon Mayor Ray Nagin’s Bring Back New Orleans Commission will release its first plans for a new version of the Crescent City. Last night The Times-Picayune was leaked some of the down and dirty details of the proposal, which perhaps raises more questions than it answers. For instance, there will be a four month moratorium on rebuilding in the hardest hit areas. Residents of those neighborhoods will have to meet as communities and put forward their own plans, and make a case for the future viability of their own neighborhood.

Tomorrow President Bush is going down to New Orleans to meet with the Commission. So tonight, as plans take shape, we’re checking back in with the city and the residents who have already gone back, who have committed themselves to rebuilding one way or another, and are now in the process of figuring out the whens, wheres, and most importantly, hows.

What You Need to Know about New Orleans Politics, 9/16/05

The Commission’s Urban Planning Final Report (pdf), a glossy and fascinating 69-page document, is now online. Check out page seven for an overlay map of what the New Orleans flooding would have meant had it happened in D.C, page ten for a look at the extent of the diaspora, and page 37 onward for “How do we rebuild neighborhoods? (point three: “Consolidate neighborhoods with insufficient population to support equitable and efficient service delivery”).