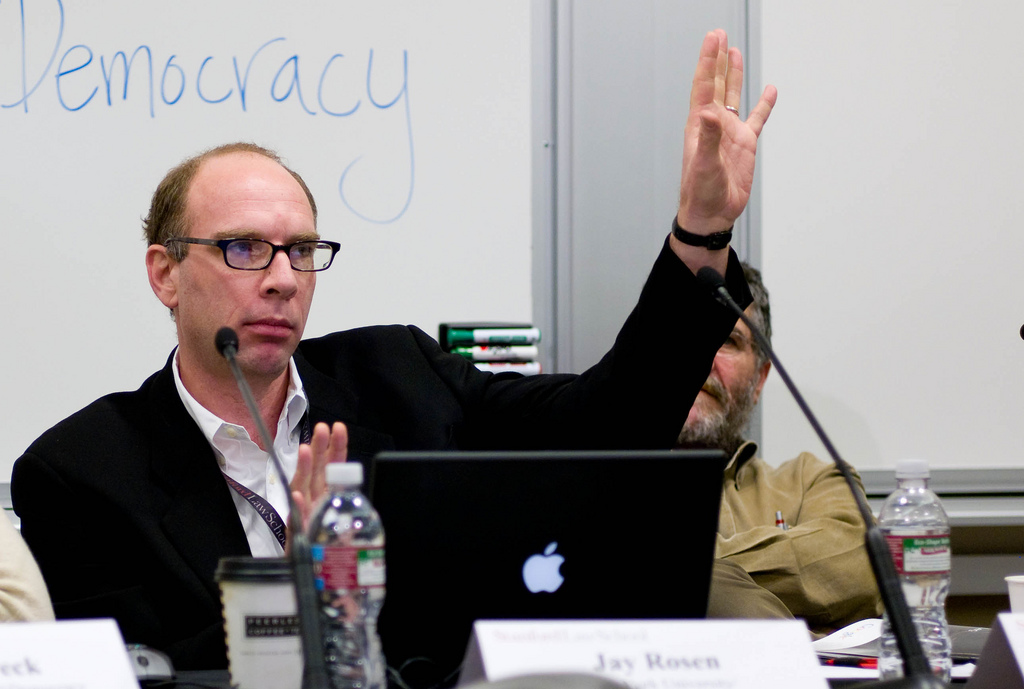 The News about the News: Jay Rosen

The News about the News: Jay Rosen

This seems to be the moment in which the death of the American newspaper can be foretold with some authority — by Eric Alterman in this week’s New Yorker; by the new local owners of the great old papers (“The news business is something worse than horrible,” says Sam Zell, in what sounds like buyer’s remorse over Chicago’s Tribune Company); by The New York Times itself in what has become a serial, almost daily obituary (here, for example) and by our guru and guide to the transformation of media, Jay Rosen of New York University.

Jay Rosen was the prophet of people-first “civic journalism” twenty years ago, before the Web gave citizen-bloggers the tools to be press lords, or at least publishers, on the cheap. In our first podcast nearly five years ago, Jay was among the first to see the breadth of the upheaval. “The terms of authority are changing,” he put it then. His website PressThink has become the real Press Club of thinking practitioners in this drawn-out existential crisis.

In James Der Derian’s Global Media class at Brown last week, Jay Rosen gave his account of the Web stars becoming institutions: Instapundit, the first distributed newsroom; DailyKos, “by far the most vibrant community I know”; The Huffington Post, rising on the power of aggregation; and “the first Web-born media company,” Joshua Micah Marshall’s Talking Points Memo and its offspring. But Jay was at his most compelling on the bad news: what feels like the inexorable, personal, cosmic, professional, civic tragedy unfolding in front of our eyes at the New York Times:

JR: The Times is a unique property… an extremely valuable institution, and it would be a tragedy if it just fell apart, or became like everything else… They’ve gained huge numbers of readers online, but they’re caught in an economic squeeze: that the readers are moving online but advertising is not, or at a much slower rate. The reason for that is even more fundamental. The newspaper of old was a sort of compendium of unlike things that were blended together because it made economic sense: sports together with the classifieds, international news, the bridge column. And now if you’re interested in bridge, there are a zillion bridge sites that are better than the bridge column. And if you’re interested in a car, you go to Auto Trader.com And if you want a roommate, you go to Craigslist. This is called un-bundling. It turns out that what the New York Times has that’s really important is not the presses; they’re not that valuable. It’s not the advertising; it’s not the classifieds, which are basically over now. It’s this reputation for trust and reliability. They’re caught in one more dilemma that fascinates me. They understand that they need to become more transparent online. By transparent I mean: telling people where you’re coming from, owning up to mistakes, explaining how you make decisions. These are the things that create trust online. However the New York Times as an institution has always operated the opposite way. It’s been a Cathedral of News: you don’t explain why you do stuff, you just put it on the front page. As [executive editor] Bill Keller says, “Watch the paper.” They’ve built up their authority by not explaining themselves, but they’re caught up in a publishing environment that values transparency. They don’t want to relinquish their authority either. They end up veering from one standard to the other. They can’t decide whether they want to be the priest of news, who had a certain mystique about him — or the most potent, most transparent institution on the Web. The only person who could resolve that strategic choice– Cathedral or Transparency? — is the publisher, Arthur Sulzberger Jr. And the tragic thing for the New York Times is that he’s just not up to it. He’s not smart enough, he doesn’t have enough depth or vision to make that choice.

CL: I want to gild that lily with one thought. It seems to me you could argue that the most important thing about the New York Times, it’s great value, is not even its reputation but its readership. Richard Rovere wrote a piece in the New Yorker in the Fifties, I think, that said basically: the American Establishment — what is it? It’s the people who read the New York Times. And vice versa. If you want to join the club, become a regular reader of the New York Times. I keep waiting for the New York Times to liberate its readers to report the news for them. Stop telling us what happened and ask us what happened. The Web is a perfect device to filter news and opinion. If they would only turn that telescope around, we could be approaching a new day.

JR: Dan Gillmor, who covered Silicon Valley for the San Jose Mercury News, was the first newspaper reporter to get a blog, to know what blogging was. A few months in he realized — he could have known, but it took the blog to teach him — that “my readers know more than I do.” That was always true of any beat reporter: that readers in the aggregate knew more than he did. What is different today is that because of the Web, that knowledge that readers have more of can now flow back toward the journalist. So the number-one asset of the New York Times is — you’re right — is not just their trust and reputation. It’s actually the knowledge and sophistication of the people who read the New York Times. And if the newspaper could begin to reverse that flow, so that they’re taking in as well as broadcasting out, they would become, I believe, a news powerhouse. But they don’t want to do that. They hesitate. They fumble the ball. They hem and they haw… because it doesn’t fit with their notion of authority, to go back to the beginning. It undermines their ideas about the Cathedral of News. It undermines, in their view, their authority to start asking: “what do you know?” That’s not the business they want to be in, that they thought they were going to be in when they joined the New York Times. The glory of the New York Times is not: “hey, tell us what you know.” It’s: “we’re going to tell you what we know, and you’re going to listen to it.” And so it’s this nostalgia for the world of one-to-many communications. What fascinating to me as an observer is that they’re very intelligent people… They know what open-source journalism is… They even read my blog occasionally. They know what I stand for… But they can’t bite the bullet, primarily because it doesn’t fit with their self-image. Isn’t that funny?

James Der Derian, esteemed head of the global security program at Brown’s Watson Institute and our host professor, closed as he is wont to do with a quote from the German culture theorist Walter Benjamin (1892 – 1940). “When you live in times of terror, when everything is a conspiracy, then everyone must play the detective.” Thank you, Jay Rosen, for showing us how to do it.

The Future of Newspapers

Click to Listen to the Show (24 MB MP3) Newspapers at a tipping point [Mlehet / Flickr] An online redesign of the New York Times aside, newspapers don’t have too much to...