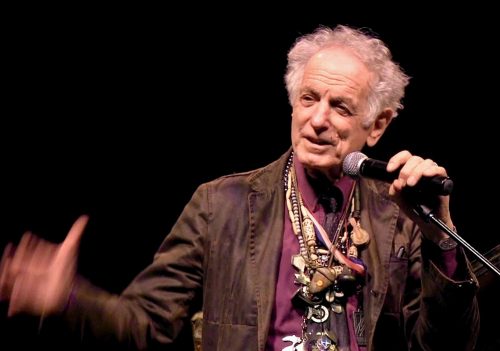 We are hanging out at the piano here with the composer and Renaissance man David Amram, who has hung with the best — starting with Dizzy Gillespie, Charlie Parker and Jack Kerouac in the 1950’s. Each of those associates, as David observes in this conversation, was an encyclopedia of music in himself. From them he absorbed an ideal he is still practicing: not multi-cultural balancing or eclectic blending but “lovingly trying to learn some of the fundamentals about some of the most beautiful things that touch your heart.” Charlie Parker introduced him to the pentatonic music of Frederick Delius. Dizzy transmitted his taste for Bartok and Stravinsky. Kerouac, David testifies, could improvise well at the piano and had, above all, “a phenomenal ear.” Musicians “were always glad to see him, because we knew that meant at least one person would be listening.”

David Amram is the quiet, almost anonymous listener in many photos with cultural icons — the guy next to Charles Mingus, or Leonard Bernstein, or Machito. David’s the one who didn’t burn out or go away, or change his style much. He is, not least, a fair embodiment of an “open source” ideal — an entirely distinctive voice who’s hard to imagine apart from the conversation that educated and produced him. At Brown, we have been listening to his work for ten days now. His movie scores (The Manchurian Candidate) and his chamber pieces can make a connection with Charles Ives or Dvorak or Alex North, with jazz and Jewish roots music. But it always sounds like David. We were blessed to get him at the keyboard. In an age of copyright madness, he reminds me that music is not something we human beings have, much less own. Music is something people do.

Click to listen to Chris’s conversation with Ben Haggarty & Company (33 minutes, 15 mb mp3) Ben Haggerty, open sorcerer Ben Haggarty picks up on the question “where do stories come from?”...