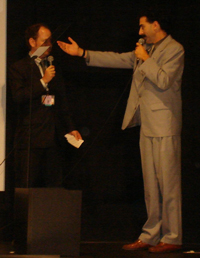 Jon wants us to take a look at the movie Borat: Cultural Learnings of America for Make Benefit Glorious Nation of Kazakhstan. None of us has seen Borat, but we know him as a character from Da Ali G Show, and we know this: he makes us squirm. He’s hard to watch. He interviews very real people and gets them to say — quite casually — very ugly things.

We explained the character of Borat to Mary in the story meeting this morning and she said “Oh. Like All in the Family.” Well, yes. Kind of. Archie Bunker was a lout but he was lovable and — somewhere near the end of each episode — he was kind. Borat, a fictional Kazakh journalist played by the British comedian Sacha Baron Cohen, is merciless.

Critics and audiences already love the movie — critics slavishly — so we’re looking at Borat, and at Stephen Colbert’s appearance in front of the White House Press Club dinner, and at the painful silences that Ricky Gervais built into the BBC show The Office, and we’re asking why in 2006 the most effective comedians make us squirm. What is it about comedy — or politics or the world — that makes us want discomfort and awkwardness with our laughter?

On sale now: Coyle And Sharpe: These Two Men Are Impostors

Host, The Sound of Young America

Thanks to emmettoconnell for suggesting Jesse Thorn

Judy Rosen, Borat Owes Me 97 Dollars, Slate Magazine, November 3, 2006: “Borat revives the dialect comedy that thrived during the first decades of the last century, when American popular culture functioned as a kind of psychic clearinghouse for anxieties about the millions of new European immigrants and black Southern migrants flooding into the nation’s big cities.”

John Rogers, Why Tell the Jokes?, Kung Fu Money, May 2, 2006: “If his sin was incivility, then what the audience/bookers were looking for wasn’t comedy. Comedy is by its nature uncivil. Comedy is, in both linguistic structure and overall psychological impact, hostile. Sometimes overtly, often not. But there is no such thing as a joke structured like: “You know what makes me happy? Yeah, that same thing that makes everybody else happy. (sigh)” There is no laugh there.”

David Edelstein, Borat: The New Wave of Squirm Comedy, New York Magazine, November 6, 2006: “I stopped laughing when, at a formal southern dinner party with several older couples, Borat announced that two of the ladies would be considered very desirable in his country, then gestured to the plainer woman at the far end of the table and said, “Her, not so much.” As the preview audience roared, I put my head down; I didn’t want to see the face of that poor woman. And at that point, I guess, the joke was on me.”

Richard Goldstein, The Tao of Borat, The Nation, November 2, 2006: “There’s a new comedy in which the ambiguities of laughter are explored and the connections between mockery and sadism are revealed. If you examine your response to Borat, you’ll have to face some dicey truths about the joy of bigotry.”

Joel Stein, Borat Make Funny Joke on Idiot Americans! High-Five!, Time Magazine, October 29, 2006: “Ali G played on people’s ability to think that young people are so different from them they wouldn’t recognize absolute stupidity and the fact that they were being made fun of,” says Andrew Newman, a writer and producer on The 11 o’Clock Show. “And now Borat does the same thing but with countries they haven’t heard much about.”

Josh Rottenberg, Beyond the Cringe, Entertainment Weekly, November 16, 2006: “Even Stephen Colbert does his Bill O’Reilly-ish shtick with a twinkle in his eye, and both guests and viewers are in on the gag. Baron Cohen, by contrast, allows his subjects and his audience no comforting recourse to ironic detachment, giving his social commentary a unique gut-punching immediacy.”

Stephanie Zacharek, Borat, Salon.com, November 3, 2006: “But “Borat” is not a guilt-free pleasure. We can laugh at Cohen’s unwitting marks, because they’re not us. But really, we’re just lucky that we weren’t in his line of fire.”

Sean R. Roberts, Borat and Kazakhstan: The Political Psychology of the Relationship, The Roberts Report on Central Asia and Kazakhstan, October 22, 2006: “The character of Borat is not about Kazakhstan per se. He is about that time in history after the U.S.S.R. fell and when its newly independent successor states were first engaging the world after decades of isolation. In other words, Borat is a satire of the former Soviet Union (FSU) of the early 1990s, Kazakhstan included.” 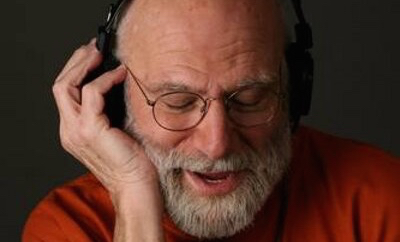 We’ve been contemplating the mysteries of music over the past few weeks, since our conversations with Gunther Schuller and Richard Powers. Perhaps the essential question here is what neuroscience is...