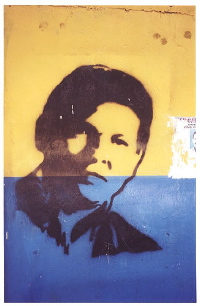 A poster for the candidate Andres Velasquez on a wall in Puerto la Cruz, circa 2000 [JRO /Flickr]

More to come tomorrow. Right now — in the control room preparing for tonight’s show, with only 30 minutes before Brendan’s fly-in mentions this post — I’m going to have to be content with a few lines cribbed from this show’s hastily written promo:

The ex-military leftie Hugo Chavez won big in Sunday’s elections… not having any opponents certainly helped. So: with an embarassing 75% voter abstention, is this the beginning or the end for Chavez? What about Venezuelan democracy?

There’s a lot more to cover, obviously, like oil policy and foreign policy and the freedom of the press. And another one: U.S.-Venezuela relations (remember Pat Robertson?). We’d also like to throw Venezuela’s evolving role within Latin America into the mix.

The hope is that — starting from the lessons and reverberations of Sunday’s elections — we can get to all of this. But, like I said, more tomorrow.

I forgot to mention in the orginal post that this show is partly a response to Flow, who asked, “What’s brewing in Latin America? What’s the scoop on Hugo Chavez?” We can’t promise any scoops, but it should be feisty:

Venezuealan Ambassador to the United States