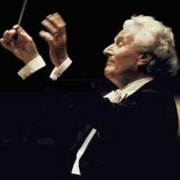 Sir Colin Davis — “the reluctant king of English music making,” the FT calls him — recounts in conversation a turning point in his life that sounds like a parable for each and all of us and maybe for great nations, too. The year must have been 1962. Davis, who’s now 80, was then 35, a tempestuous young superstar conductor with the BBC and other symphony orchestras in London. He had just come through “the last night at the Proms,” the traditional spring revels, when…

… suddenly I realized I didn’t want to do it anymore. I really wanted to be a musician, not a success. I wanted to make the most beautiful music possible.. That maybe didn’t happen in five minutes. It was a big crisis in the middle of my life. I didn’t like the life I was leading. My first marriage had gone to pieces. I had to start again. And one of the things I did was: I talked a lot to my mother and my sisters, and I went back to the places I remembered as a kid, because they told me I was a very jolly child, up to the age of five. So that must be there somewhere: things like that don’t disappear; they lie at the bottom of a pile of rubbish you’ve thrown on it. So I went back to try to find that spring of natural good nature, natural peace with the little world of a child of five. And I got married again and had five children — and they all play musical instruments. It really dates from then. And even then there were still remains of the fiery intolerant bad-tempered fellow. But the one thing I hung onto was music. Not to exploit music but really to try to get as far as I could to the essence of it.”

You must picture, to get the sense of this rambling, riffing exchange, a notably relaxed, handsome Englishman — supple on the podium, soft-spoken off it — who could make you think at different moments of Peter O’Toole or Noel Coward but also James Bond. He received me on the morning after an open rehearsal of Mozart and Schubert with pianist Mitsuko Uchida and the Boston Symphony Orchestra. This week he is conducting Edward Elgar’s oratorio, based on Cardinal Newman’s poem, The Dream of Gerontius. Gesturally, Davis’s manner with orchestra players reminds you that not for nothing do they speak of “playing” music. In person he is almost continuously laughing quietly. His physical ease, he says, “may have something to do with the fact that I sleep with my Alexander Technique teacher.” He introduced his wife to the art of focused mind-body relaxation, and now she coaches him and others. Alexander Technique, he observes, can save musicians from an early, spastic end. “When you let things happen,” as he says, “there’s a chance that you might hear the music.” Colin Davis is a prodigious knitter — yes, as in the flowered cardigan he was making for Ms. Uchida (the only woman beside his wife he knits for). And he is an incessant reader. “I think if you stop reading, your mind just closes down.” 2007 was a big reading year: all of Dickens, and a start on Balzac’s four-score-and-some novels. “One is pushing one’s ignorance as far as it will go,” he says, laughing again. So we speak also of an obscure modernist classic he swears by, Hermann Broch’s The Death of Virgil (1945), which I’d read under his influence. The book details the deathbed consciousness of Augustus Caesar’s court poet in his final hours, despairing of art as well as power and eager to destroy his epic Aeneid before he dies. Broch’s is a book, to Colin Davis’s mind, that is “trying to say what only music can say” and what Mozart in particular does say– about twilight mysteries, the organic “humus of existence,” the breath, in and out, of melancholy and consolation in life, about laughter and death, childhood and loss. Broch’s Virgil, in his last conversation with Augustus, says his life as a writer was wasted and wishes rather that he’d made “one useful human gesture.” And how did Colin Davis fix on his own “human gesture?”

To begin with, my passion for music was so intolerable that it was only gradually that it turned around from domination and telling people what to do, to trying to make this have nothing to do with tyranny and fear, because no good music ever came of any of that. 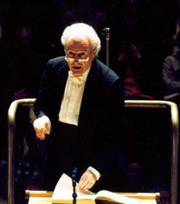 You listen to the great dominating maestros, like Toscanini in Verdi’s Requiem: it’s amazingly disciplined but it’s completely heartless to me. It’s a fantastic piece, and all that’s in it cannot come from the will to dominate other people. So that had to go. When it’s a big problem for yourself, you can only nibble away at it gradually, like a sort of miniature beaver, until the edifice collapses. And you don’t want anymore to do with that. But of course there are a lot of people who wouldn’t accept that, but I’m still there. There are some people who have a kind of Jehovah complex. They want to be dominated. They want to be told what to do, so they don’t have to be responsible. Now I don’t think great music is made like that. When everyone in the orchestra feels responsible for this piece of music, that’s when life begins.

How much of this can be translated into public life?

… These two demons — power and money — are running the show, and they’ve gone mad. They’re just false values. Those are the two things you really have to tackle if you want to be a human being. You’ve got to come to grips with not wanting power over other people and not working for money… Q. And how do great nations come to grip with that idea? A. Well, they don’t, do they? And the more you read, the more you realize it’s never been any different… For the private person to strut around the town, and to admire yourself when you shave in the morning is really a catastrophe for a human being. Q. Can the world at large ever taste and share the fruits of a lifetime in music? A. The attention of the world is not focused on the potential message of music. It’s all in The Death of Virgil and Augustus’s bread and circuses… That kind of world has no interest… Evolution hasn’t been kind. Brains can’t organize the world. It’s a bad business, and what can poor little Mozart do about that?

And what is his account of that post-imperial Englishness I sense in Davis’s music and his gab? “Perhaps,” he said, “it’s a curious mix of skepticism, lust for reading, and trying to follow Broch’s advice that the most important thing in the end is common decency.” 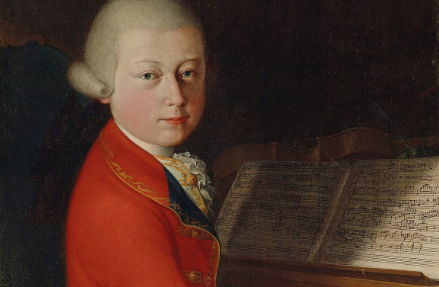 Who else could be said to make you smarter, just listening to the sound of his music? Only Mozart, that we know. For 300-and-some years now, he has set the...