The Price of Fantasy

The Price of Fantasy 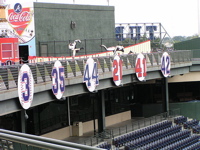 56, .406, 755 — baseball’s record hit streak, batting average, and home run total: numbers at the intersection of history, myth, memory and, now, at the heart of a lawsuit between ball players and their fantasy fans. Because from these numbers has grown a side business: fantasy baseball now makes an estimated $1 billion a year.

Fantasy baseball is the logical middle-aged move from armchair quarterback to armchair general manager. Once you realize that you’ll never be able to hit — or pitch, for that matter — a 95 mile-an-hour fastball, once even the childhood fantasy of being able to do so seems remote, suddenly the prospect of maneuvering the people who can — buying and trading real major leaguers in an imaginary baseball universe — is better than nothing. Six million people seem to think so.

Fantasy baseball only works because companies provide their customers with real names and real numbers: Albert Pujols and his 20 home runs, Pedro Martinez and his 70 strikeouts. (Every good fantasy relies on a dose of reality, it seems.)

The case reaching U.S. District Court in September was brought by the fantasy sports company CBC, which is asserting it doesn’t need to acquire licensing rights in order to use those names and numbers. This is pure public domain information, this is history, this is our national right, CBC argues. Major League Baseball and the Player’s Association disagree. This case is not about ownership of stats, MLB lawyers point out; it’s about the right of publicity. If you’re going to make money from our players’ names and achievements, you’re going to have to get permission. And you’re going to have to pay.

The debate expands quickly past a first set of questions about home runs and ERA. When does performance become identity? Who owns a celebrity’s personal persona? And, in the end, what are the commercial boundaries of fantasy?

Click to Listen to the Show (24 MB MP3) [Invaluable community member Garrett “nother” Zevgetis pitched this show, and we thought we’d offer him the chance to produce it. Help him...

Click to Listen to the Show (24 MB MP3) This show will record at 4pm EST. The ever helpful Emmett O’Connell thought he had written the perfect pitch: a dash of baseball,...