The Redemption of Michael Brown

The Redemption of Michael Brown

Until we’re forced to come face to face with the darkness, we’re really not interested in dealing with it at all. Now that Brownie has, he’s able to move out of this environment, and we’re left onstage. It’s us that’s left onstage. Brownie is able to take his curtain call and leave the space.

An American play in three acts. 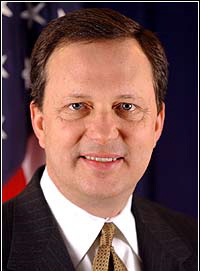 We didn’t pay much attention to the rise of Michael Brown. We took dark pleasure in watching him get sacked as a Congress fell all over itself to censure him. Now, as he hits the talk shows again and we see video of him doing his job, he’s emerged as an oddly sympathetic figure; certainly not worthy to be head of FEMA, but a credible witness to incompetence and willing, at least, to concede his own part in disaster.

And willing, in his concession, to exact his revenge.

It’s worthy of Eugene O’Neill. Or of Shakespeare. We’d like to think that we examine politics as a collection of issues and choices, but we don’t. We watch it like theater; we look for characters we already understand. Hillary Clinton was and always will be Lady Macbeth. George W. Bush established himself as Prince Hal in 2000, a myth that is only now beginning to lose its shine.

Who, then, is Michael Brown? Playwright Jim Fitzmorris suggested this afternoon that Brown is of King Lear, the unnamed servant who refuses — too late and to no effect — to pluck out Gloucester’s eye. In “Marriage of Figaro,” the lickspittle servant gets the better of his master. Did that happen this week, as the AP’s video reveals a capable-sounding Brown and an inattentive Bush?

What dialogue are we missing, in this play of ours? What speeches to the audience? When do our characters recognize their own hubris? When does the audience recognize its own complicity? (Or do you remember, in April of 2003, tearing your hair out in outrage as Brown was nominated?) Is it a history? A Moliere farce? A commedia dell’arte?

Help us write the script. Below is an act-by-act synopsis; as you post to this thread, please do so in the form of lines from a stage or screenplay.

An empire reshuffles its bureaucracy and a man of little consequence — a mediocre lawyer from a small town — is nominated for a great position. Unaware or unconcerned with his own limitations, he accepts. In the distance, a prince fights a war. As the act closes, we hear news of a tempest offshore.

The tempest arrives; the man, though satisfied that he has fulfilled his job, is proved incapable. Hundreds die. The empire, shamed and outraged, humiliates the man and demands that he be driven from office. His failure becomes a spectacle. The prince, a friend, stands by.

Scapegoated and alone, the man is confronts his own inability. He turns on the prince and the empire that hounded him. He is holding up a mirror…

Author, analyst, former Hill senior staffer, producer and writer for “The West Wing”O’Donnell was stuck on the set and couldn’t make it to the show.

Playwright who describes process as “infuriating scoundrels by barely changing them into fictional characters.”

Jay’s living room, rearranged upon his return after Katrina [Jay Forman] Last night during The Redemption of Michael Brown we read a scrap of dialogue from Jay Forman. Jay, who...

Hi Mike, I just wanted to tell you that, despite the unfair shrapnel that you are taking in the press on behalf of the federal government, I believe you & your...