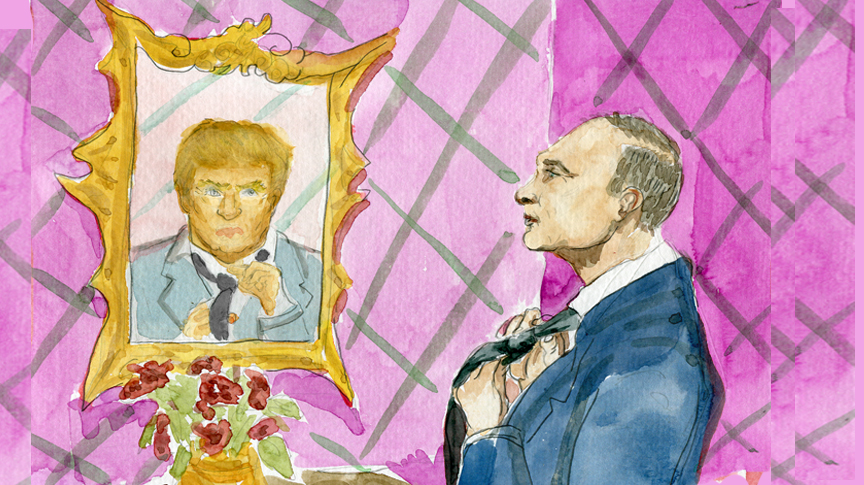 For many Americans, Russia once more is the name of the riddle: a mystery wrapped in an enigma that may or may not be deciphered in an FBI investigation. The faithful detectives in Washington and in much of the media want to believe that this is the story of how our President got his job, and how he could lose it. But for us, the exact relationship between Vladimir Putin and Donald Trump is less interesting than the broader narrative of how these two respective nations developed in tandem; and why they are now, once again, butting heads.

The dynamic today, we believe, is framed by trauma: their loss in ‘89 of both empire and ideology; our 9/11 loss of imperial immunity.  This national insecurity unfolds in the form of  a new chess game—not quite a Cold War—being played out by strong men and bullies, plutocrats and oligarchs, small-time hired hackers and big-time Big Data collectors.  The result is not only the spread of so-called fake news (a new name for the old propaganda) but also a broader eclipse of truth. We began this week by attending a talk given by Masha Gessen at Harvard’s Shorenstein Center. The Russian-American journalist and trenchant Putin critic warned that while their Vladmir might offer some behavioral insight into our Donald, we shouldn’t try to explain the election of the former solely through the influence of the latter. While both men may try to dominate and distort our sense of what is real, we shouldn’t indulge in conspiracy theories. If we want to understand the seemingly unimaginable transformation of politics in both countries, we need to understand their citizens: America in the context of Americans; Russia in the context of Russians.

Taking up Gessen’s challenge, we’re trying to understand life in the Slavic slice of the political scene, with help from some of the smartest Russophiles (and -phobes) we know.

Richard Lourie has given voice to Russian dissent and dissidents—in a Boston accent, no less—for many years. The Mattapan-born Russian translator helped bring the words and works of nuclear physicist / heroic activist Andrei Sakharov into English. More recently, he’s taken on the Russian president’s fatalistic politics in the forthcoming book, Putin: His Downfall and Russia’s Coming Crash.  On our program, Lourrie helps us understand how Russia’s leadership created a disaster during a time of great national promise and potential.

Robin Hessman—director of the 2010 Peabody Award-winning film, My Perestroika—sees a more complicated situation. Her film documents the lives of Russians who grew up in the Soviet Union and came of age in the 90s, in a radically altered country. Through her work and her friendships abroad, Hessman found many competing visions of what Russia might have looked like, and of what the country’s citizens actually wanted during perestroika time. But in each narrative she tells, one senses an underlying theme of traumatic loss. Her subjects experienced, for better or worse, left behind a world they understood, and were thrust into a nation transformed. The messiness of this adaption may be one of the underlying causes of our own vague, mystified and Westernized understanding of Russian life and politics today.

On the other end of the spectrum, historian Timothy Snyder and political theorist / podcast host Yascha Mounk offer stern warnings about what we should fear in the Russian model. The country’s problems and neuroses, for them, manifest not only in the form of internal national entropy, but in active aggression against Western liberal democracy (not just in the U.S.). Both men are now offering their own models of resistance and urge us to be alert to the warning signs of creeping totalitarianism. David Filipov, the Washington Post’s Moscow bureau chief, rounds out the hour with an on-the-ground report from the recent wave of massive, anti-corruption protests. These street-level resistance movements, which look rather similar to the Women’s March and anti-immigration-ban demonstrations in the U.S., may provide the most acute point of comparison between the Russian and American experience today.

Guest List
Richard Lourie
Russian translator and author of Putin: His Downfall and Russia's Coming Crash
Robin Hessman
Filmmaker and director / producer of My Perestorika
Timothy Snyder
Historian and author of On Tyranny: Twenty Lessons from the Twentieth Century
Yascha Mounk
Lecturer on Government at Harvard University and host of The Good Fight podcast