The Spread of HIV in Africa

The Spread of HIV in Africa 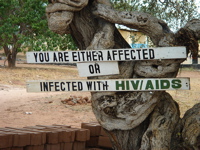 Africa is home to roughly two thirds of the world’s HIV/AIDS cases, and the enduring question is: why? The popular explanations include extreme poverty, lack of HIV education, and insufficient access to condoms and healthcare. But epidemiologists crunching the numbers are finding that certain assumptions just don’t hold up — and that conventional wisdom doesn’t explain or help the AIDS epidemic in sub-Saharan Africa.

What may be more significant, though, is an old idea made new again. In Uganda’s successful “ABC” campaign that dates back to the mid 1980s, “A” stands for Abstinence, “B” for Be faithful (or “zero grazing,” as President Yoweri Museveni likes to call it), and “C” for Condomize. In the Western aid community, Christian conservatives emphasize “A” (abstinence). Others — based on what’s worked in the West’s gay communities and in Thai brothels — preach “C” (condoms). The “B” has sort of fallen through the cracks. Data on the effectiveness of “A” and “C” in Africa seem murky at best, but there’s growing recognition within the world of HIV prevention that the neglected “B” really does seem to work. And that it might a ticket out of the hell of African AIDS. The evidence from Uganda shows that its homegrown campaign for fidelity — based on fear and education — has worked better than anything else in sub-Saharan Africa.

‘The whole thing is too big now, too heavy,’ said Sam Okware, a top Ugandan health official who designed early, frightening anti-AIDS campaigns. ‘It has adapted too much to international guidelines instead of sticking to our own methods, which were very controversial at first but which worked.’

It’s tricky, of course, both morally and practically, to influence people’s sexual behavior. Especially if you’re a foreign aid agency trying to be culturally sensitive. But emphasizing monogamy could be critical for southern Africa (as opposed to western countries, or even North Africa) because of the common practice of having multiple concurrent sexual partners. Americans and Europeans, it turns out, average more sexual partners over a lifetime, but southern Africans tend to have more at once. A small but increasing number of HIV epidemiologists believe these sexual networks of multiple partners are at the heart of Africa’s AIDS epidemic.

Can we filter politics and political correctness from the data to ask what new strategies could slow the spread of HIV in Africa?

Last week Chelsea recorded a phone interview with Dr. Sam Okware, a top health official in Uganda. Because the phone connection was so bad, we decided that we couldn’t broadcast the interview. The following are highlights from the conversation.

I think A and B are the most important. Abstinence is important because half of our population consists of children. B is important because two thirds of the transmission is happening among the married people of Uganda. I’m most optimistic about abstinence. Since we have launched the ABC campaign, the age at which people first have sex has increased from fourteen to eighteen. So when you consider that half of our population is in that age group then you can understand that it is a very big group who can avoid HIV, and can avoid HIV without a lot of financial input.

Being faithful has worked. We have reduced the percentage of extra-marital sex by 60% but unfortunately, in the last two years there has been a rise in the number of people who are having sex outside of their marriage. This number has increased by 14% for men and 4% for women.

The biggest obstacle right now is condom use. Ugandans do not like to have the word “condom” in their vocabulary. Then there are the issues of economics. Uganda is a developing country and a person has access to fewer than seven condoms per year. As you can see, this is quite a problem. What we have to do is stress the importance of abstinence. If people cannot abstain from sex then they have to be faithful and if they cannot be faithful then they must use condoms. Condoms are extremely important because 68% of consenting adults do not use condoms. Secondly, there are a lot of sexually transmitted diseases among adults and infidelity has gone up so all of these people need to use condoms. In Uganda we’re talking about a group of people who will have sex at any cost so it is not possible to emphasize only A, you have to emphasize A, B, and C.

Unfortunately because the anti-viral drugs are available we are having a degree of complacency. People think that HIV now is like diabetes and high blood pressure. They think that HIV is curable and once they are on drugs they think that they are no longer infectious. That is one thing that we are working on now. We have to get a new strategy to handle HIV/AIDS within the era of antiviral therapy.

Ran a voluntary counselling and testing center in Botswana

Zimbabwean musician who has lived in South Africa and Botswana

Daniel Halperin, Old Ways and New Spread AIDS in Africa, SFGate, November 30, 2000: “‘All our men used to be circumcised, creating improved health and hygiene; it should never have been stopped,’ Sarara Mogwe, a well-known Botswana public health nurse, told me. ‘Now we women are also paying the price.'”

Ethan Zuckerman, Everything you know about AIDS is wrong, my heart’s in accra, March 9, 2007: “How about poverty and AIDS? We know that trade increases economic development in Africa. But it turns out that increasing exports is correlated with higher rates of AIDS. If you double trade, you quadruple AIDS – this makes some sense, as we known that migrants and truck drivers are much more likely to be affected.”

Jennifer, AIDS and aid, I Will Read 10 Pages, May 7, 2007: “For one thing, the type of campaign for condom-use that works well in a western country like the United States – where we’re comfortable with discussing sex and comfortable with limiting offspring, does not work in countries where virility must be constantly proven, both through having several partners (if not several wives) and having numerous children.”

kusala, Men Are, In Fact, Dogs, kusala, May 10, 2007: “Of course, nothing about [infidelity] should be shocking to anyone who lives in the real world, which is why it’s infuriating to me that we persist with the “A-B-C” anti-HIV measures (about as juvenile as the “A-B-C” name sounds) that are so beloved by the Bush administration (even while his erstwhile “AIDS Czar” recently had to resign in embarrassment over revelations that he patronized a high-class “massage service”.)”

HIV/AIDS education in Botswana is in the workplace, The Nata village blog, May 11, 2007: “Everyone present (like everyone in Botswana) has lost someone to AIDS. Vino (the supervisor, standing left) encouraged his staff to participate in “zero grazing” which means to stick with one partner.”