I’ve always seen the internet as a … way to shape and influence the debate and join the discussion. So it’s not really about adhering to some structure of what a blog should be … What we’re celebrating is participation. We’re not all going to be alike. 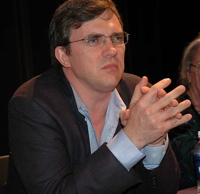 The heavyweight contenders are in the Open Source ring. That’s Glen Reynolds of Instapundit in the Tennessee Libertarian trunks. And that’s Jerome Armstrong of MyDD and Daily Kos in the colors of California and the Opposition.

They’re both out in hard covers now: Reynolds — a sort of Goliath among the “war bloggers” on the way to Iraq — has the nerve to call his book “An Army of Davids.” Armstrong — co-authoring with Markos Moulitsas Zuniga, a.k.a. Kos — is locating himsef in “Crashing the Gates” somewhere in the mystery zone between the implosion of the Howard Dean insurgency and the new establishment of electronic Democrats.

Do we still believe in the Web transformation? Is it Right? Is it Left? Is it real yet?

We’re expected to be wary now of “blog triumphalism,” but what if the new tech is still underhyped?

Or is it already commercialized beyond recognition?

Is the beloved “long tail” of unbought, unbossed little voices still wagging in the world of the A-listers and the corporate sites?

Were you prepared for the Walmart capture of blog publicists for the company line?

Can you see the pretty radical difference in the way Republicans and Democrats are workshopping and using the new machinery?

And of course: how does it play in the contest for Congress this year, and the mobilization of money and opinion around the succession to George Bush in 2008.

As it happens, I audio-blogged two strong interviews with Glen Reynolds: Instajournalism as ‘functioning anarchy'” and Kos: “A Democratic Clubhouse on the Web” three years ago, when we were all young Internet sprouts.

So please help me crank up a fresh set of questions and answers here.

Author of An Army of Davids: How Markets and Technology Empower Ordinary People to Beat Big Media, Big Government, and Other Goliaths

Author of Crashing the Gate: Netroots, Grassroots, and the Rise of People-Powered Politics

CENTCOM Has the Personal Touch

[At CENTCOM,] we’re well known in the blogosphere– we post stories all the time. Like maybe there’s a dialogue going in a blog about starving children in Iraq, and we’ll...