Can anybody head off a new war that we know will end badly? This is Shibley Telhami’s question at the end of our conversation about the Iran sequel to the misery in Iraq. His answer seems to be: No — we’re in the trap already, headed for the grinder. 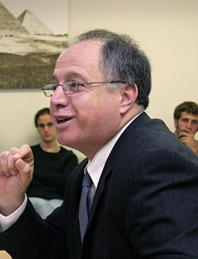 Shibley Telhami: on the slippery slope

Professor Telhami at the University of Maryland is the only scholar we’ve interviewed in this series who briefed Karl Rove five years ago on the fallout of war on Iraq. Telhami proceeded to sign the prophetic New York Times ad in September, 2002 that spelled out the disaster unfolding then. Rove seemed to be listening for political damage to his boss, and heard nothing of what Telhami was warning about: damage to American standing in the Middle East , in the mirror, everywhere.

Shibley Telhami has a straight-talking individual voice in think-tank circles around Washington. He speaks from a fascinating personal history. He was born into a family of peacemakers and conciliators in an Arab Christian minority in a village near Haifa in 1951, when Israel was 3 years old. In Israeli and private schools, his first degrees were in mathematics and then philosophy before he took up international relations with Kenneth Waltz at Berkeley and more recently: polling in the Mideast.

So he is a social-science theorist with a flood of facts and factoids at his fingertips. Arab opinion, he says, is the flip of what the Bush White House wants to believe. That is: Arab Muslims, in fact, love Americans for our democratic values, (who we are), and hate us for our imperial policies, (what we do). We’re still the land of freedom and opportunity and the place for the ambitious to study and grow; but next to nobody believes the US is about “spreading democracy” or even a “war on terror” in the Middle East. There’s a “pervasive anger with the United States” in the Middle East today, Telhami says, and a 80- to 90-percent consensus that American policy is to “control oil, help Israel, and weaken the Muslim world.”

The US choice on attacking Iraq sounds spookily beyond rational or even political control:

We’re right on a slippery slope toward that war. We’re on a course for war. The objective has already been stated, and our political mainstream has accepted it. It’s not just that the Bush administration has stated it. No one has challenged the basic concept that ‘I will never allow Iran to acquire the knowledge’ — not even to acquire the weapons, but ‘to acquire the knowledge and the capacity to put the weapon together.’ Once you acquiesce in that you’re on the slippery slope toward war — even the Democrats who are saying: ‘let’s try diplomacy first…’ …It’s fascinating about our political system. The most important thing is the assumption at the beginning. If you’re assuming that this is something that has to be done — something you cannot live without doing, that all your strategies are intended to prevent them from having nuclear weapons, that you have to prevent them from having them, at all costs — then in the end you’re going to have war. We don’t pay attention to that assumption at the beginning. It kind of sneaks in. The President could make it in a speech, and no one takes it on. And then it becomes Conventional Wisdom. And then we’re entangled talking about the tactics, and not paying attention to the slippery slope that was begun by the very declaration of the statement of how our interests are defined… My worry is that, if you go to war with Iran and we don’t have an end to the Iraq war, we have structural conditions that are setting in motion a process that — no matter who the President is — they cannot stop. That’s my worry, and that’s how I see Iran in this case.”

Is the takeaway message that our war machine is out of all control?