Salman Rushdie, no less, finished his packed public talk at Brown three weeks ago with the observation that Pakistan is the globe’s true nightmare nation — that if Pakistan doesn’t rescue itself from political collapse into extremism, “we’re all fucked.” In this “Year of India” at Brown, we are talking again about the Pakistan question next door — about India’s nuclear-armed neighor and sibling, on the verge, some say, of meltdown.

Farzana Shaikh is a child of Pakistan who writes about her country now as the daughter of a distressed family. The thread through her pithy analysis, Making Sense of Pakistan, is that Pakistan’s problem is not fundamentally with India, much less with the United States and the world, but with itself and Islam. She begins:

More than six decades after being carved out of British India, Pakistan remains an enigma. Born in 1947 as the first self-professed Muslim state, it rejected theocracy. Vulnerable to the appeal of political Islam, it aspired to Western constitutionalism. Prone to military dictatorship, it hankered after democracy. Unsure of what it stood for, Pakistan has been left clutching at an identity beset by an ambigous relation to Islam…

Salman Rushdie’s irresistible prose is one touchstone of our conversation:

It is well known that the term ‘Pakistan,’ an acronym, was originally thought up in England by a group of Muslim intellectuals. P for the Punjabis. A for the Afghans, K for the Kashmiris, S for Sind and the ‘tan’, they say, for Balochistan. (No mention of the East West, you notice: Bangladesh never got its name in the title, and so eventually it took the hint and seceded from the secessionists….). So, it was a word born in exile which then went East, was borne across or translated, and imposed itself on history; a returning migrant, settling down on partitioned land, forming a palimpsest on the past. A palimpsest obscures what lies beneath. To build Pakistan it was necessary to cover up Indian history, to deny that Indian centuries lay just beneath the surface. 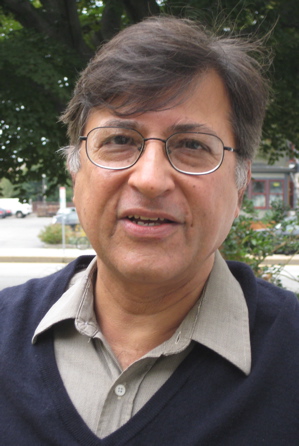 Click to listen to Chris’ conversation with Pervez Hoodbhoy (34 minutes, 17 mb mp3) It is well known that the term ‘Pakistan’, an acronym, was originally thought up in England by...