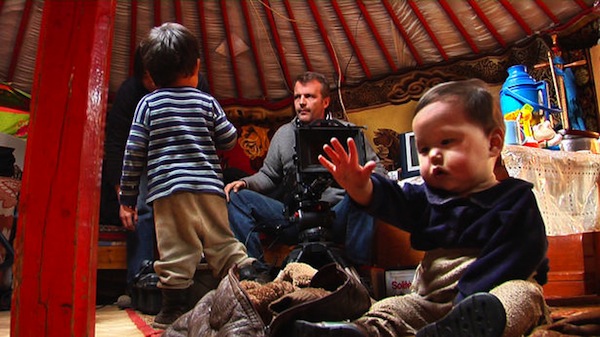 Thomas Balmès, the French film documentarian, had a worldwide hit last year with Babies. The movie was all pictures, no dialog. No text, no voice-over. No argument, no “cause.” Just irresistibly patient long shots of newborns and their parents in Namibia, Mongolia, Japan and San Francisco, provoking wry comparisons and conversations (speak for yourselves) but mostly questions.

Is this the man to tune up — maybe redesign — the education of kids, and college kids, who already learn more from images and screens than they do from sentences and books? Thomas Balmès is saying that an education system that neglects to teach its students to participate in making the images they so readily consume is collapsing all around us, not least at Brown, where he was Artist-in-Residence last week. Academics (like his father, a Lacan scholar) write impenetrable texts for a closed circle of friends and rivals; students lean on screens, even in class, and learn by images without acknowledging their adopted language. The students who hovered with him all week arrive typically with ambitious and original film projects to save the world but very little idea, he said, of the how — or of craft, form and story-telling. Among the 10 “rules” that Thomas Balmes has adapted from the great Victor Kossakovsky, one suggests that while it would be nice to save the world, better perhaps for a filmmaker on a project to think of saving herself. It is part of academia’s duty, in Balmes’ view, to create at least a part of its product in today’s vernacular, a language defined overwhelmingly by images.

Today there was a survey published saying an average American child watches on average 7.5 hours of images per day — on phones, iPads, computers, TV. This is insane: to have so little concern about images in places like this to me is criminal. You need to participate in the making of these images, to be thinking about images and not learning how to communicate only through writing. It’s time that academics really taking this seriously. This is crucial. …

Students should participate in the creation of images, and not give it up to Murdoch, and others. You have people here in academia who are working in a kind of closed circle and not caring about what is going on outside. People do read, but writing cannot be the only mode of creation in the academic world. Academics must take and grasp, very rapidly, moving images, and participate in the production of these images… In France every child before 18 spends one year studying philosophy. You don’t become a philosopher, but you study. This is crucial. Reading images, understanding images, semantics, semiotics, whatever, is absolutely crucial and must be implemented at every age in the school system…

Thomas Balmès with Chris Lydon at the Watson Institute, April 8, 2011.

No Artist Left Behind

Last week Chris caught up with our neighbor, Poet Laureate Robert Pinsky. Pinsky was fresh from a fundraiser for The Boston Arts Academy, which is Boston’s only high school for...

Click to Listen to the Show (24 MB MP3) The number, one billion, is so staggering it’s hard to wrap your head around. But that’s how many school-age kids there are...