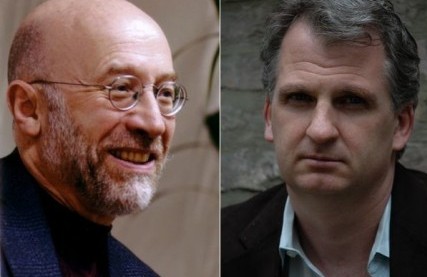 Timothy Snyder, a rising-star historian at Yale (most recently of Bloodlands: Europe Between Hitler and Stalin), is turning up the heat on his friend Tony Judt’s parting sermons about “social democracy.” I’m taking Tony Judt’s last books as “a catalog of the malaise” in the land, and as a catalyst of an Open Source quest for an alternative narrative of the 2012 presidential campaign. Grab a line, please! Tim Snyder drew almost literally the last words out of Tony Judt as he succumbed two years ago to Lou Gehrig’s disease. Thinking the Twentieth Century is their “talking book,” which they spoke and edited together. It’s Judt’s intellectual autobiography and a shared reflection on history at a dicey moment in the Western world. Tony Judt’s hope was in the “social democratic” compromises that keep alive dreams of equality, inclusion and fairness on a capitalist playing field. Tim Snyder adds his own high notes of urgency. What’s ruinous today, he’s saying, is not the cost of “social democracy” in education, public health, and modern transport, which can be shown to pay for themselves. Rather it’s inequality and social isolation that exact a price in many measures of health and happiness — in crime, mental illness, life expectancy and social stability. The problem in Europe, Snyder says, is typified by Greece, which “like the United States has lots of wealth inequality and lots of rich people who avoid paying taxes.”

This is another lesson of history: you can tell states are about to fall when the wealthy people who have been their bulwark are no longer contributing. They’re making bets elsewhere, and the state isn’t strong enough to make them pay taxes. And that’s kind of where we are now, which is why I worry. Not only do we have very rich people who don’t pay very many taxes, but we have this idea that it’s bad to make them pay taxes. And Mitt Romney incorporates that argument.

Timothy Snyder with Chris Lydon in the historians’ lounge at Yale, April 9, 2012 I hear a piercing cri de coeur in Tony Judt’s last several books, touching something much hotter and heavier than the campaign rancor so far, clearer and deeper than anything the Tea Party or Occupy have articulated, but not so distant from the general panic attack that many millions among us are facing:

We have entered an age of fear. Insecurity is once again an active ingredient of political life in Western democracies. Insecurity born of terrorism, of course; but also, and more insidiously, fear of the uncontrollable speed of change, fear of the loss of employment, fear of losing ground to others in an increasingly unequal distribution of resources, fear of losing control of the circumstances and routines of our daily life. And, perhaps above all, fear that it is not just we who can no longer shape our lives but that those in authority have also lost control, to forces beyond their reach…

Tim Snyder is speaking also of something gone drastically wrong in the public conversation. We now have a 24-hour news cycle, as he puts it, and an ever narrower discourse. It annoyed Tony Judt, he says, that we call ourselves a nation of non-conformism and free speech, when in truth “our intellectual life is impoverished compared with many democracies in the world or with the U. S. 50 years ago.” Here’s the Tony Judt version in print:

We cannot hope to reconstruct our dilapidated public conversation — no less than our crumbling infrastructure — unless we become sufficiently angry at our present condition. No democratic state should be able to make illegal war on the basis of a deliberate lie and get away with it. The silence surrounding the contemptibly inadequate response of the Bush Administration to Hurricane Katrina bespeaks a depressing cynicism toward the responsibilities and capacities of the state: we expect Washington to under-perform… Most people don’t feel as though they are part of any conversation of significance. They are told what to think and how to think it. They are made to feel inadequate as soon as issues of detail are engaged; and as for general objectives, they are encouraged to believe that these have long since been determined.

Tony Judt acted out a rare conviction in the power of the word — and of his own words to the last breath. He believed it was the intellectuals’ job not only to broaden the public conversation but to change it. “If we do not talk differently,” he wrote , “we shall not think differently.” So a central part of this Tony Judt challenge we’re pursuing has to do with the mainstream American discourse we call “media” — how it works and what we make of it. Our next conversation in this thread is with the ever provocative champion of “civic media,” and now a star of “social media,” Jay Rosen of the dauntless and durable PressThink website, who chanced also to be Tony Judt’s colleague at New York University. By way of reintroducing Tony Judt, consider his passion for trains, and train stations — those “cathedrals of modern life,” collective projects for individual and common benefit, as he wrote. In Mumbai and Milan, Paris and New York, trains and their stations remain both “perennially contemporary” and “aesthetically appealing” — quite unlike airports. And they work! — much as they were designed to work from the beginning. Tim Snyder makes trains a sort of lesson that Tony Judt learned in scholarship, in life, in politics — that “we don’t become individuals all by ourselves. We can’t become responsible, we can’t become interesting, we can’t become individuals of any sort without some sort of collectivity. And I think trains were all about that…”

When you’re on a train, you can be all alone — reading your book, you don’t have to be paying attention to anyone else. But you are with other people, even if the only thing you have in common with the others is that you’re going to the same place, in the same direction. But the process of being on the train is one of looking around and noticing differences, right? So you can be alone together. Which is different from, on the one hand, the American practice of commuting in your car by yourself, staying up late playing a video game, where you’re alone alone. It’s also different from the kind of radical socialist or communist dream of being together together, where we’re all part of the same working class and we’re going to get rid of all those other people who aren’t… It’s somewhere right in the middle. It’s alone together. Together alone. Trains give us that, and in some sense I think that’s what modern society has to be like. The alone-alone is kind of a nightmare. The together-together is kind of a nightmare. It’s the alone-together, you know, which is tenable and which we can make if we want to make it.

Timothy Snyder with Chris Lydon in the historians’ lounge at Yale, April 9, 2012

Comments, please! Or email to chris@radioopensource.org. And thanks!