In our third go at this miserable business of sanctioned American torture, Philip Gourevitch turns it around, Pogo-style. We have met the victims, he says in effect, and they are us. 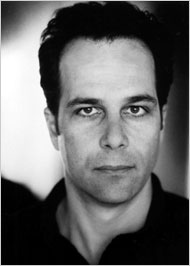 Gourevitch‘s eye and story-telling pen are as powerful as any thousand pictures from Abu Ghraib. This is his reading, for example, of the interrogation (with the help of dogs) of a prize prisoner called “AQ” (for Al Qaeda) before he turned out finally to be a used-car dealer in Baghdad, a man of no political or security interest:

Once again Smith moved in with the animal. In one picture you see it lunging, ears back, a black blur of muscle and jaw… Smith is in the picture, crouching over the dog, restraining him and urging him on at the same time.

It does not seem possible to amplify the drama of this moment, but the look on AQ’s face does just that. He has the horrified, drawn-back, and quivering expression of a thoroughly blasted soul. It is all there in his eyes, moist and mad with fear, fixed on a mouthful of fangs. What secrets does he have that we want so badly, but are so precious to him that he endures this day after day? The answer in AQ’s case was none. Once again at Abu Ghraib they had the wrong guy, or they had the guy wrong, and when they realized this after several months of dogs and bondage and hooding and noise and sleeplessness and heat and cold and who knows just what other robust counter-resistance techniques, they told him to scram, and closed his case. The pictures of AQ on that night before New Year’s are the last known photographs of our prisoners on the MI block at Abu Ghraib, which seems fitting, because these pictures don’t leave much to the viewer’s imagination, except the obvious question: if you fight terror with terror, how can you tell which is which?

As Abu Ghraib was the sequel to Guantanamo, our classroom conversation with Philip Gourevitch flows out of our session two days earlier with Philippe Sands — and Sands’ point that the criminal torture story began with President Bush’s dismissal of the Geneva Conventions in February, 2002 and “migrated” from there. One of the Morris-Gourevitch interviews with the investigator Tim Dugan gets it all into a nutshell, in the vernacular:

Tim Dugan was summoned to join a meeting with Colonel Pappas to discuss the interrogation of this fresh crop of Saddam cronies. Pappas explained that he’d just got off a conference call with General Sanchez and the secretary of defense. “He said, ‘We’re starting a special projects team, and we’re going to break the back of the resistance. Anybody who doesn’t want to volunteer for this has to leave the room. And if you volunteer, you can’t talk about this to anybody,'” Dugan said. “We all volunteered and he said all approach techniques were authorized. Someone asked, ‘Even dogs?’ And he says, ‘yep, even dogs.’ He’s like, ‘We got a chance to break this unlawful insurgency, and the people in an unlawful insurgency have no protection under the Geneva Conventions.'” 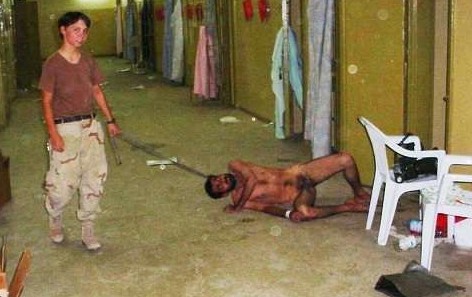 Lynndie England with “Gus” at Abu Ghraib Errol Morris’s Standard Operating Procedure is a shocking, depressing work of art that might tell you almost nothing you didn’t know in your...

Newly released images of naked prisoners, some bloodied and lying on the floor, threatened to revive public anger over abuse by U.S. guards at Abu Ghraib prison at a time...