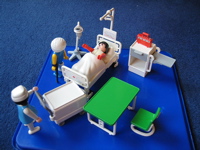 Yesterday the Massachusetts legislature passed a bill that would make the state the first in the nation to mandate nearly universal health care coverage for all its residents. The plan pieces together coverage through government subsidies to private plans for the “working poor,” and tax penalties to businesses and private individuals who can afford care but do not purchase it. According to the Times, the plan is expected to cover about 95 percent of the state’s uninsured population within three years, and Governor Mitt Romney says he will sign the bill with gusto.

So is this new plan the start of something different? An attempt at full or nearly full care health coverage in the U.S.? Does the Massachusetts plan have the potential to be a national model, or at least a model for other states? According to The New Yorker’s Malcolm Gladwell universal health care in America has always been a popular idea without enough political traction to succeed.

Six times in the past century—during the First World War, during the Depression, during the Truman and Johnson Administrations, in the Senate in the nineteen-seventies, and during the Clinton years—efforts have been made to introduce some kind of universal health insurance, and each time the efforts have been rejected.

The Massachusetts plan isn’t universal health care, but rather, near universal health insurance. Instead of talking about universal health care on the model of European countries and Canada, the new plan is more tied into notions of the “ownership society,” perhaps made even more palatable as a state initiative (rather than a federal one), and a bill introduced to a blue state legislature by a Republican governor with strong business ties (and possible national political aspirations).