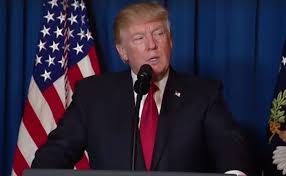 In Search of The Donald Doctrine.

Trump in the World

Trump says he knows more than the generals, so this week we’re talking to the colonels about the future of U.S. foreign policy.

Col. Lawrence Wilkerson joins us to try and sort through all the noise and speculation surrounding the president-elect’s amorphous international stance. Wilkerson has long been a consummate observer of institutional politics and power, first in the military ranks, later in White House as chief of staff to then-Secretary of State Colin Powell. Now a professor at William and Mary, he sees our country in a real battle with The Three Plagues of Apathy, Lethargy and Ignorance. He shares with us the perspective of his ‘awakened’ students, his professional assessment of Trump’s cabinet of generals, and what the foreign policy priorities of any US president should be in the 21st century.

Later, distinguished historian of international relations, retired Col. Andrew Bacevich tells us why there needs to be an institutional purge of the U.S. military’s senior leadership. All three- and four-star generals must go, he says. The reasoning is simple: they’ve failed to do their job , i.e. “bring America’s wars to a timely and successful conclusion.” Finally, the brilliant Stephen Walt of Harvard’s Kennedy School conjures up best case/worst case scenarios of Trump’s foreign policy, as informed by his ever clear-eyed, realist perspective.

Can any of these astute observers of the international scene find some hope for the future under the Donald? Well, as the satirist Jonathan Swift once wrote: “When a true genius appears, you can know him by this sign: that all the dunces are in a confederacy against him.” If this is true, then President-elect Donald Trump just may be a foreign policy genius. In an open letter, published back in March of 2016, all the neocon masterminds of the Iraq War — everyone from Armitage to Wolfowitz — came out, en masse, against his presidential candidacy, on the grounds that he possessed the makings of an unmitigated foreign policy disaster.

Though there exists room for debate, Trump has staked out a few (surprisingly) reasonable policy positions: ‘spreading democracy’ through exercises in nation-building is not in our national interest; free-riding NATO allies should take on more of the collective burden; de-escalating tensions with Russia is to our benefit. Obviously, there are also numerous grounds for alarm, as well. So often, Trump’s more commonsensical foreign proposals came packaged in speeches that trafficked heavily in xenophobia and calls for civilizational war, threats of trade battles and reneging on diplomatic pacts, praises for the efficacy of torture and support for the widespread proliferation of nuclear weapons.

As we try to sort through these mixed messages of hatred and reform, we turn to our colonels for the longview: What is the Donald Doctrine overseas, and how it will change the image of our nation, at home and abroad?

Guest List
Lawrence Wilkerson
professor of Government and Public Policy at the College of William and Mary
Stephen Walt
professor of International Affairs at Harvard Kennedy School and author of The Origins of Alliance
Andrew Bacevich
professor emeritus of International Relations and History at Boston University and author of America's War for the Greater Middle East: A Military History