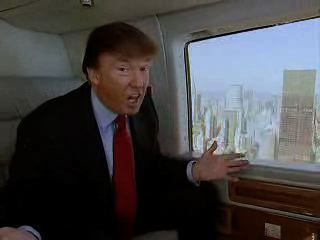 What's really going on, between reality TV and "the reality-based community"?

Barack Obama has kept his distance from this campaign, but he did intervene last month to remind Americans that they’re not voting to give someone a recording contract: “This is a really serious job. This is not entertainment. This is not a reality show.”

Hillary Clinton likes that line, too, and has used it more pointedly against the former host of The Apprentice: “You can’t say to the head of another nation’s government… if you disagree with them, ’you’re fired!’ That is not the way it works in the real world!”

It’s true, of course—but the rise of Trump reminds us that American politics lost their humble, aldermanic relationship with a simple “real world” a long way back.

Obama’s own victory was telegraphed and televised—the dignified, better-than-human First Black President got screen-tested more than once in Morgan Freeman and Dennis Haysbert. And a Brooklyn-ready media rollout teased an age of “hope” and “change” that the candidate was unable fully to bring about.

The gap between the real and the imagined isn’t a new phenomenon—it’s old as politics itself, and only accelerated by TV. As early as 1960, Norman Mailer read John F. Kennedy aright—not as a job applicant but as an avatar for two Americas, old and new:

this candidate for all his record; his good, sound, conventional liberal record has a patina of that other life, the second American life, the long electric night with the fires of neon leading down the highway to the murmur of jazz.

The author and journalist Ron Suskind is in our studio—he was the one who transcribed a gem of ideology from a secret source in the Bush White House:

The aide said that guys like me were “in what we call the reality-based community,” which he defined as people who “believe that solutions emerge from your judicious study of discernible reality. That’s not the way the world really works anymore,” he continued. “We’re an empire now, and when we act, we create our own reality. And while you’re studying that reality—judiciously, as you will—we’ll act again, creating other new realities, which you can study too, and that’s how things will sort out. We’re history’s actors… and you, all of you, will be left to just study what we do.”

Trump may be imperial in that same sense, if Matt Lauer’s botched tackle of the two presidential candidates is anything to go by.

For more on the realm of unreality we’re in, we turn to Veep‘s Frank Rich, and The New Yorker’s Emily Nussbaum (above), if the age of mass-media politics that began with the glow of Kennedy is ending with the groan of Trump—himself made-for-TV. His unpredictability, his familiar pout, his Lorax coloring and proportions are keeping him in a race and a conversation he might have lost, on the merits, long ago.

To millions of Americans, Trump has some real effects; he represents hope—maybe for boardroom efficiency or a frank simplification of political questions—or a change in atmosphere, away from managed expectations and polite coastal contempt. His may be a dark fantasy, but he sees that politicians, like TV personae real and semi-real, are in the business of fantasy, and that the “show horse” part of the job can’t be so easily shrugged off.

How do we talk about political reality from so deep inside the world of the reality show?

In 2016, the presidential election became electric. Donald Trump and Bernie Sanders have separately disrupted the fixed matchup of another Clinton and another Bush, and flat-footed, for now, the mainstream consensus...

Click to Listen to the Show (24 MB MP3) Due to studio availability, this show will record at 5:00 pm ET For the last month we’ve been focusing one show each week...