Thanks to Ethan Zuckerman for leading us to this story. 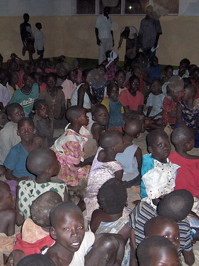 For the past 19 years, the Lord’s Resistance Army — half religious cult and half rebel paramilitary group — has terrorized Uganda’s northern Acholi province.

They have raped and mutilated the inhabitants of countless villages and killed at least 12,000 people. They have kidnapped and enslaved over 25,000 children, often forcing them to kill their own families before joining the LRA as child soldiers or sex slaves. Almost two million Ugandans have fled their homes and are now living in refugee camps under horrendous conditions. (The LRA has attacked camps, too, and government soldiers who are supposed to protect the refugees have been accused of committing atrocities as well.) Tens of thousands of children, Uganda’s “night commuters“, regularly walk a dozen miles from their rural villages to city centers to prevent night-time abduction by the LRA.

What could explain these actions? The group’s leader, self-proclaimed “spirit medium” Joseph Kony, says he wants to establish a government according to his own “unique interpretation of Biblical millenarianism.”

Who is Joseph Kony? Is he a mad man, prophet, military genius, an Acholi nationalist or a terrorist?…The battle to answer this question [has been] pursued with equal vigour by both his friends and adversaries. An obsession with violence and its use as an instrument to pursue LRA’s equally opaque goals has been a shocking staple in the LRA mystery.”

The International Criminal Court has issued arrest warrants for five LRA leaders and is launching a full investigation into crimes against humanity. Meanwhile, independent negotiators are trying to broker some sort of a peace deal between the LRA and the Ugandan government.

How did this happen, and can anyone stop it? What role has the Ugandan government played? Will the ICC’s involvement bring Kony to justice, or will it complicate chances for peace? How does this conflict fit in to other regional conflicts, in Sudan and in the Democratic Republic of Congo? Are we ignoring another wholesale slaughter in an African country?

Former U.N. Under Secretary-General and Special Representative for Children and Armed Conflict

Founder and President of LBL Foundation for Children

Senior Associate at the International Center for Transitional Justice, responsible for work in Uganda

Olara Otunnu, The Secret Genocide, Foreign Policy, July/August 2006: “To the extent…Uganda receives any attention, it is generally in the context of the bizarre and brutal Lord’s Resistance Army (LRA)…. Harrowing images of Ugandan children walking at night to avoid LRA raids have seeped into the public consciousness. That is where the awareness ends, however, and that’s just how the Ugandan government wants it.”

Ethan Zuckerman, Just how crazy is Joseph Kony?, My Heart’s in Accra, 6/29/06: “Kony used his interview to make it clear that Ugandan president Museveni was responsible for the atrocities in Acholi, not him…. Needless to say, very few people are buying this story.”

Matthew Green, Kony Tells Acholi He’s Sorry, Institute for War & Peace Reporting, 7/8/06: “Even more remarkable was not what he said at the August 1 press conference, but what he told assembled northern Ugandan and southern Sudanese elders in closed sessions beforehand. He apologised for the many atrocities inflicted by the LRA.”

LRA victim: ‘I cannot forget and forgive’, BBC News, 6/29/06: “Then on the seventh day, because I never expected to live, I insulted their commander in the hope that in revenge he would kill me.”

If you tuned into the show knowing nothing about Uganda beforehand, how much would you really understand afterwards? Would you have a picture of people mercilessly tortured and mutilated? Would...