Every day Americans are subjected to a barrage of advertising by the pharmaceutical industry. Mixed in with the pitches for a particular drug — usually featuring beautiful people enjoying themselves in the great outdoors — is a more general message. Boiled down to its essentials, it is this: ‘Yes, prescription drugs are expensive, but that shows how valuable they are. Besides, our research and development costs are enormous, and we need to cover them somehow. As ‘research-based’ companies, we turn out a steady stream of innovative medicines that lengthen life, enhance its quality, and avert more expensive medical care. You are the beneficiaries of this ongoing achievement of the American free enterprise system, so be grateful, quit whining, and pay up.’ More prosaically, what the industry is saying is that you get what you pay for.

Over the past two decades the pharmaceutical industry has moved very far from its original high purpose of discovering and producing useful new drugs. Now primarily a marketing machine to sell drugs of dubious benefit, this industry uses its wealth and power to co-opt every institution that might stand in its way, including the US Congress, the FDA, academic medical centers, and the medical profession itself. (Most of its marketing efforts are focused on influencing doctors, since they must write the prescriptions.) 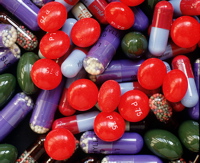 When Dr. Marcia Angell — former editor of The New England Journal of Medicine — published The Truth About Drug Companies, it was proclaimed as The Jungle of the 21st century. But whatever shockwaves Angell’s book sent, they clearly weren’t strong enough to unsettle Big Pharma’s foundation.

This week alone The New York Times ran three articles that surely had Big Pharma refilling its prescription for damage control. According to the Times, doctors are reaping millions of dollars by over-prescribing Epo to the detriment of their cancer patients, psychiatrists are raking it in by over-prescribing anti-psychotics to children, and Purdue Pharma is facing hundreds of millions in fines for “misbranding” the painkiller Oxycontin. And these issues are just symptoms of the plague that has overtaken our healthcare system.

We haven’t decided what angle to take for this show. We could build an hour on drug regulation, the drug approval process, the pharmaceutical industry’s relationship with doctors, or as listener duplicity suggested: how patients are trying to circumvent the conventional drug industry altogether. Which of the above shows do you want to hear? Should this be a series? What are your experiences with pharmaceuticals?

We’ve decided — in large part because of your comments — to do a series on the pharmaceutical industry. We’re kicking this off tonight with a conversation with Dr. Marcia Angell. She’ll discuss how the industry has deteriorated since she published The Truth About Drug Companies, and what reforms need to be made.

Marcia Angell, The Truth About the Drug Companies, The New York Review of Books, July 15, 2004: “Over the past two decades the pharmaceutical industry has moved very far from its original high purpose of discovering and producing useful new drugs. Now primarily a marketing machine to sell drugs of dubious benefit, this industry uses its wealth and power to co-opt every institution that might stand in its way, including the US Congress, the FDA, academic medical centers, and the medical profession itself.”

Rich Thomaselli, Big Pharma Doesn’t Like How It Looks on YouTube, Advertising Age, June 4, 2007: “The online-video site famous for exploding Diet Coke bottles is blasting Big Pharma as YouTube gains popularity among drug-industry critics as a means to influence public opinion on the industry.”

Christopher Lee, Doctors, Legislators Resist Drugmakers’ Prying Eyes, The Washington Post, May 22, 2007: “Many doctors object to drugmakers’ common practice of contracting with data-mining companies to track exactly which medicines physicians prescribe and in what quantities — information marketers and salespeople use to fine-tune their efforts.”

Peter Rost, Why did Pfizer hire detectives to spy on former PFE executive?, Question Authority with Dr. Peter Rost, June 6, 2007: “Of course, for a big corporation to send out hired goons to monitor shareholders and former executives almost resembles mafia activity, or how Russia sends agents to kill dissidents. And while it may appear surprising for a large corporation to send out detectives to dig up dirt, I think that is exactly how Pfizer operates.”

John Mack, SiCKO is Boffo but Not Anti-Pharmaco, per se, Pharma Marketing Blog, June 8, 2007: “But, as promised, SiCKO is not about Moore confronting CEOs and other corporate bigwigs as he does in his other movies. Pharma had feared this would happen when SiCKO was just a gleam in Moore’s eye: Ken Johnson, senior vice president of the Pharmaceutical Researchers & Manufacturers of America (PhRMA) trade group told a journalist that industry executives were ‘freaking out and pulling their hair out.'”

IgniteBlogger, Public trust eroding, IgniteBLOG: The Perfect Storm, March 28, 2007: “Significant differences between the public’s view of pharmaceutical companies and the industry’s self-perception have caused the pharmaceutical industry to lose the trust of patients, physicians, and others.”

Judy Norsigian, Feeling Great? There’s a Drug for That: How the Pharmaceutical Industry is Selling Prevention, Women’s Voices for Change, May 29, 2007: “The pharmaceutical industry spent much of its $4.2 billion direct-to-consumer advertising budget in 2005 on ads targeting healthy upper-income, middle-aged people. A common underlying message was this: You appear to be healthy, but a deadly heart attack, hip fracture, or other medical catastrophe could occur at any time.”

Ask your doctor about Havidol.

[Thanks to duplicity for suggesting this show.] Chelsea noted in her post for Marcia Angell on Big Pharma last week that we were were thinking about a whole series on our...