As a companion to our show on John Updike — now gone five years and at the same time back with us thanks to our guest Adam Begley’s brilliant biography — we’re seeking the writer in the trail he left behind: the postcards he sent and his TV interviews, in the fan letters and the criticism.

He was a writer above all things, determined to generate three pages per workday. That adds up, over a fifty-year career, to a huge bibliography (see below).

Updike By the Numbers

186 stories across 1,949 pages in the new Library of America edition;

2 Pulitzer Prizes, among many others;

an archive purchased for $3 million by Harvard University after his death;

and an 18 handicap at golf (his second-favorite pastime).

Updike was a writer and reader more prolific, maybe, than any ‘literary’ author now working — though we’re interested to hear where you see Updike’s habit, or his tone, today. But he was also a father and two times a husband. Adam Begley points out a moving moment from the 1982 documentary, What Makes Rabbit Run?, in which David Updike wrestles with being a writer’s son:

There are also the dozens of postcards and letters that Updike sent our host, Chris Lydon, as a longtime guest and friend of The Ten O’Clock News and The Connection. Best among the available meetings is a seven-minute interview Chris did with Updike on the beach in Manchester-by-the-Sea, after Rabbit At Rest had won Updike his second Pulitzer in early 1991. Enjoy the hair, the feeling of the wind, and the good serious talk of death and what’s important:

The interview was seen from another angle, and recorded forever, in a watercolor painting done by a friend that hangs in our Beacon Hill office. I didn’t know Updike, but I know that it was a term of art on The Connection to “pull an Uppy” — that is, to decline participation in a radio conversation more kindly and thoughtfully than most people accept. And the postcards testify to that genteelness in Updike, the kind of thing that made Nicholson Baker, himself a great New England transplant and the avidest fan, sent his hero a quote regarding Balzac from John Jay Chapman:

Your complete literary man writes all the time. It wakes him in the morning to write, it exercises him to write, it rests him to write. Writing is to him a visit from a friend, a cup of tea, a game of cards, a walk in the country, a warm bath, an after-dinner nap, a hot Scotch before bed, and the sleep that follows it. Your complete literary chap is a writing animal; and when he dies he leaves a cocoon as large as a haystack, in which every breath he has drawn is recorded in writing. 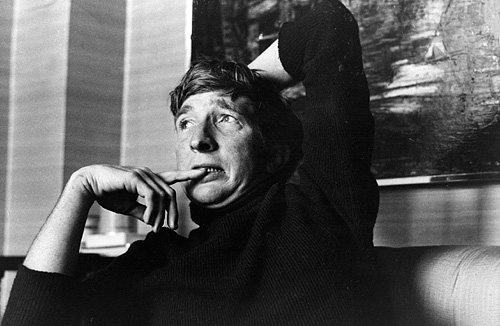