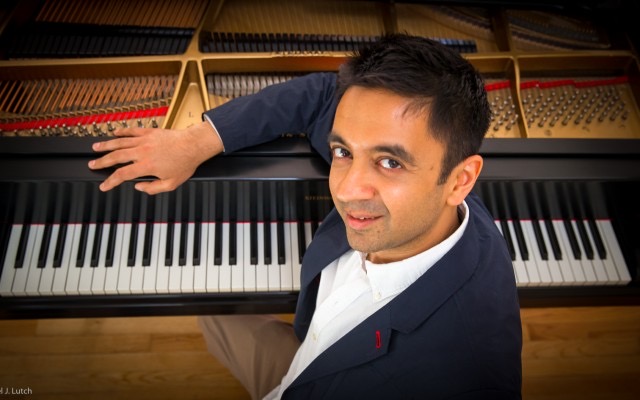 Vijay Iyer’s Life in Music: "Striving is the Back Story"

Vijay Iyer’s Life in Music: "Striving is the Back Story"

Vijay Iyer brings rare stuff to jazz piano, starting with a Brahmin Indian name and heritage, and a Yale degree in physics. Gujarati stick dances and Bhajan devotional songs from Northern India are in his blood, well mixed by now with the pop sounds of a boyhood in Rochester, New York: Prince and James Brown, then Miles and Monk. He brings also — to his Birdland debut this Spring, and to his new CD, Historicity — bassist Stephan Crump and the drum prodigy Marcus Gilmore, who just happens to be the grandson of the last living drum giant of the Forties, the eternally experimental Roy Haynes. But the sum of Vijay Iyer’s gifts is more exciting than any of the parts. He brings to improvisational music, most of all, the aura of an art starting fresh, just beginning — not looking back, much less winding down.

Could we talk, I inquire, about the space he seems to be building out between cultures and eras, between East and West, between the music that marked the American Century at its best and whatever it is that’s trying to happen next? So, on the morning after his opening gig at Birdland, Vijay Iyer is sitting at the piano in a rehearsal studio just off Times Square, making conversation in much the same confident probing spirit he makes music.

I identify with the culture of cities. I find cities to be inherently transnational… And that reflects my own perspective, and my own sense of hybridity and the dynamics that unfold in the music I make…

I was an improviser… I started on violin and then on piano learned to play by improvising. There was never any boundary between improvising and playing a song. It was really the same thing for me. That was how I learned to play. And really, that’s how we as humans learn to do almost everything… It’s the way we stumble around in the world.

Most of our social network as a family was in this burgeoning Indian community in Rochester, New York. That was where my Indianness existed, with family and with family friends. But in my neighborhood or in my school, Indianness was more a mark of difference, and something that had to be negotiated. There was this dual existence, which is reminiscent of Du Bois’ double-consciousness kind of thing. The Karma of Brown Folk…

I have this other heritage, and that heritage is a very important part of who I am, and it’s an important part of my music. But I’ve been here as long as anybody else my age. I was born and raised here and 100 percent immersed in American culture. To me, it was never a question of how American I was, but to others it is always a question…

The drummers are the real history of the music. The rhythm is where the music lives and grows…. I wish I was a drummer. I try to connect with the drummer and do what the drummer does. When you link with the drummer, everything sounds better. You get that resonance, that sympathetic action. That’s part of what music is: the sound of people moving together.

Here in New York…there are people playing together just for fun, or for mutual betterment…. People are in it because they love it, and that love is constantly expressed in wonder at new music and at new possibilities and new discoveries and new talent, new players on the scene who have something new to offer.
Architecture is a fair metaphor. The analogy holds up. Architecture is about creating spaces. You’re creating spaces for people to move around in. That’s what we’re doing. And you want people to be free, but you also want to offer them things, to offer them possibilities. You want to frame their activities in a way that helps infuse it with meaning.

My particular American experience is one of improvisation and navigation through a certain set of challenges and opportunities… For me, as a person of color in America, I’ve looked to histories of other communities of color in America as an orienting guideline. And that’s part of what led me to really stay with this music: the history of the African American pioneers who dreamed the impossible and made this music happen… That striving is the back-story for this music. When you talk about improvised music, it’s as William Parker says: “In order to survive, the music was invented.” Not to match my struggles with theirs—I had a very different path, and my parents had a very different circumstance—but they also came here with very little, and had to build something.

Where is jazz headed in a new century? With the pianist Vijay Iyer as guide, newly tenured as a professor at Harvard, it tends toward the experimental, with drummers, young...