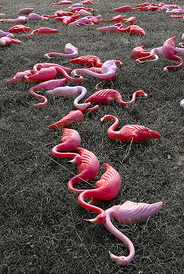 Several times now you’ve asked us to take a look at bird flu. There was good ol’ Potter back in August…and again in October… and then there was the request made by fred02472 around the same time.

We haven’t been ignoring you. We’ve been trying for some time now to figure out a way to cover the bird flu story, which has captured the world’s attention and has provoked a great deal of fear and anxiety amongst those of us who would prefer not to die en masse in the street. It’s hard to know where to start, especially given the hype and panic around the story. Weakened public health infrastructure in the US and abroad? Poor monitoring and inadequate testing facilities in the far east? Mass domestication of chickens and their close proximity to humans? Calls for state-sponsored production of generic Tamiflu? My head hurts already. (Hopefully it’s not the flu.)

So here’s what we’ve come up with. We’ll begin at the beginning. Rather than start with the politics of the story or the public health response angle of the story, we’d like to do a show about the people we’re calling “virus hunters” – the scientists who are doing the hard work of tracking down and mapping the virus world wide. We’d like to tackle the science but also make it accessible, to help us all understand the sleuthing so many dedicated researchers are using to pin down and ultimately fight this disease.

Here are some of our questions: How do you track a mutating virus across dozens of countries, hundreds of species, and thousands of years? Do zoologists and human biologists have to team up like never before? Did the 1918 “Spanish flu” actually originate in Spain? Does all influenza really come from China, as some scientists think? How does a virus from wild birds become so deadly to domestic ones? Why do some become efficient in human-to-human transmission and others don’t? The conversation doesn’t have to stick to avian flu exclusively…conversations about tracking SARS, AIDS, and other migrating diseases would also be entirely appropriate.

As Mary would say, this story has a tremendous amount of “blog juice.” Help us find the bloggers tackling the science of the story. Also, if you’d like to read some of the articles I’ve tagged on this subject (and add some of your own) you can do so here. If you tag sites with “radioopensource” and “virushunters,” we’ll be able to see them and we’ll make sure to add them to our reading list. There are also two great articles by the New York Times‘ science correspondent Gina Kolata that are on our reading list, but which are hiding behind the Times Select firewall.

Head of the Field Veterinary Program of the Wildlife Conservation Society

Author, Appointment at the Ends of the World: Memoirs of a Wildlife Veterinarian

UPDATE: Terrence Tumpey just came down with a flu (irony!) and sadly won’t be able to join us…

Chief of Molecular Genetics at the Influenza Branch of the CDC

A Complete Guide to Hunting the Bird Flu Online