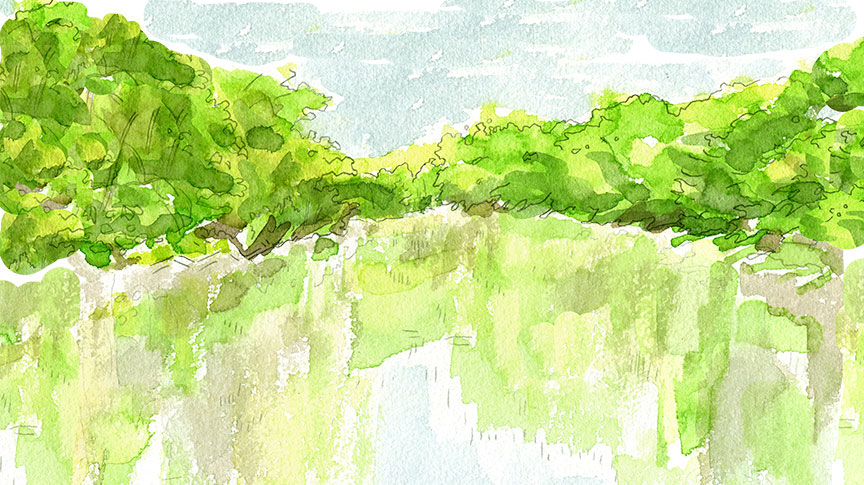 Walden & the Natural World of Transcendentalism

Henry David Thoreau, our specimen of American genius in nature, wrote famously short, and long.  “Simplify,” in a one-word sentence of good advice.  But then 2-million words on 7-thousand pages in his quotable lifetime journal.

It’s one of many odd points to notice about Thoreau at his 200th birthday: that the non-stop writer was equally a man of action, a scientist and a high-flying poet whose imagination saw that “the bluebird carries the sky on his back;” and still a workman with callused hands, at home in the wild, a walker four hours a day on average, in no particular direction.  His transcendentalism was all about the blossoming intersection of nature-study and introspection, fact and idea, detail and ideals.  In his pine grove, on his river, at his pond, the outdoor Thoreau. What does a Transcendentalist do, we were asking in the first of three bicentennial Thoreau shows?  All the answers are to be found in the canoe trip that became a masterpiece, titled: A Week on the Concord and Merrimack Rivers. What the Transcendentalist does is soar – between water below and sky above; between this day and eternity, between Nature, and human society.

We start our journey at the South Bridge Boat House near Thoreau’s house on Main Street in Concord, just upstream from the Concord River itself.  A naturalist philosopher in the Thoreau lineage, Alex Strong from Maine, is one of our guides.  During our trip down Thoreau’s “little Nile”,  Alex tells us about what the strapping, young 22 year old was learning on his voyage:

He was learning about big-N Nature when he was studying the Perch, studying when flowers bloomed, where the bees were. The notes he took, the meticulous notes, weren’t just about the little details; they’re about understanding the whole picture and keeping nature sacred while understanding it, in all its finite mundane details.

Next up, the still-water Walden, a pond in Concord, Massachusetts where Henry Thoreau wrote his great book in a cabin by the shore. In 1845 Walden was a woodlot next to the new railway where the 28-year-old poet went to “suck out the marrow of life,” whatever it turned out to be. Our guide to the pond and the book, the young philosopher John Kaag had been in and out of the Walden water the other morning before we got there.

While we’re here, at Walden, we decided to stop and consider the statuesque, very tall, dark-green, almost black, pine trees all around Walden Pond, trees that Thoreau came to consider cousins, virtually human.  Richard Higgins, widely traveled in Concord today, has written a book on Thoreau and the Language of Trees, and he has no doubt that Thoreau spoke it fluently, from the heart.

Finally, we conclude with a Thoreauvian meditation on walking. Real walkers are born, not made, Thoreau liked to say.  “If you are ready to leave father and mother, and brother and sister, and wife and child and friends, and never see them again, — if you have paid your debts, and made your will, and settled all your affairs, and are a free man, then you are ready for a walk.”  These days the woods and the bookstores are full of such walkers.  Andrew Forsthoefel made his reputation in public radio walking 4000 miles from Philadelphia to San Francisco, with a sign that said “walking to listen” and recording back-road stories. And then there’s the literary traveler Paul Theroux, of Cape Cod and Hawaii, of the Mosquito Coast and The Great Railway Bazaar. He has spent a lifetime on trains, and in kayaks, and a lot of it on his own two feet in China, in our own Deep South and specially in Africa.  In our conversation, Theroux extends Thoreau’s idea that walking is in-born, into some more than others. Guest List
John Kaag
professor of philosophy at UMass Lowell and author of American Philosophy: A Love Story
Alejandro Strong
philosophy teacher, wilderness guide and founder at Apeiron Expeditions
Paul Theroux
travel writer, novelist, essayist and author of The Tao of Travel: Enlightenments from Lives on the Road
Richard Higgins
author of Thoreau and the Language of Trees
Andrew Forsthoefel
radio producer and author of Walking to Listen: 4,000 Miles Across America, One Story at a Time