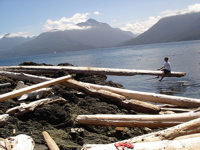 If we are in fact at a public-opinion tipping point on global warming, and if a see-saw is a blunt metaphor for that tipping point, the U.K. this week just took a flying leap and pounced on one end of it. You could hear a resounding smack in the 48 hours(!) of world media attention trained on British economist Sir Nicholas Stern and his discovery that unchecked global warming could squeeze world’s economy by 20%. The Economist, ever master of the headline, summarized it thus: “Global Warming, Economic Cooling?” In adding his World Bank economic cred to the chorus of scientific voices sounding the alarm, Stern significantly widened the scope of the audience that might be listening.

Tony Blair and Gordon Brown certainly are. They now say they want to put the U.K. front and center in the climate battle — and hope to reap spoils in the form of new jobs and technologies. And apparently they hope the U.S. will follow suit.

If you’d like to find out more about the politics and effects of global warming, check out our ongoing series here.