John Murtha and George Bush, back when they were closer. [Website of Congressman John Murtha] 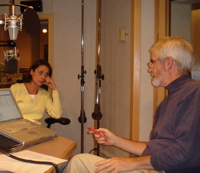 Ambassador Bodine in the studio with Chris [Brendan Greeley]

Did John Murtha force a real conversation about leaving Iraq? On November 17, he described the war as a flawed policy wrapped in an illusion. The White House responded directly and immediately with a press release that linked Murtha’s speech to the policies of Michael Moore. Then, on November 20 we hear the President in China suggesting, essentially, that we’re preparing to leave Iraq.

And we’re making good progress. More and more Iraqis are taking the fight to the enemy, and day-by-day, they’re assuming more responsibility for their own security. And as the Iraqi security forces gain strength and experience, we can lessen our troop presence in the country without losing our capability to effectively defeat the terrorists. A reduced presence of coalition forces will clearly demonstrate to the Iraqi people that we have no ambitions to occupy their country. As I’ve often said, we’ll stay as long as necessary, but not one day more.

Tomorrow the President is addressing the U.S. Naval Academy. The LA Times says he’ll herald the improved readiness of Iraqi troops. Regardless of what the White House says about John Murtha, are we preparing to get out of Iraq? Is Iraq ready for us to get out of Iraq? Murtha said “the American public is way ahead of us” on Iraq. Has the domestic fight shifted, from “do we stay in Iraq” to “how to get out, and whose fault was it that we left”?

Senior Fellow, Belfer Center for Science and International Affairs at the Kennedy School of Government

Covered Central Europe for The Financial Times; Pakistan, Afghanistan, the former Soviet Union and Russia for The Times (London); and India as a freelance journalist.

Editor, The Right War?: The Conservative Debate on Iraq.

Congressman Jack Kingston, Live from Iraq, as dictated to staff and posted to REDSTATE.ORG

Lyrics to the Clash’s “Should I Stay or Should I Go”, LYRICSFREAK.COM

What am I doing here? Late in our show What John Murtha Wrought, Chris asked the question “What would your ideal President do now in Iraq?” Anatol Lieven, a senior research...

Click to Listen to the Show (24 MB MP3) Police Academy [Chad Sandoe / Flickr] A strong Iraqi police force is one of the stated “pillars” of the Bush Administration’s Iraq strategy....