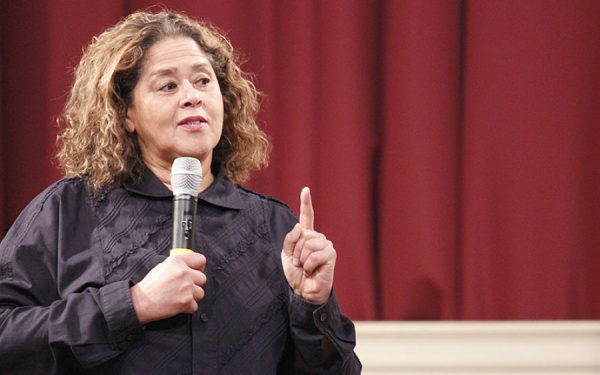 Anna Deavere Smith works barefoot on stage — the better to walk in the words of the people she’s impersonating; perhaps also to summon Walt Whitman, who said we’d feel his spirit “under your bootsoles.”

Actress and documentarian, Anna Deavere Smith is all feeling, no bootsoles.

Her new show is “a play in evolution,” and it’s all over the lot, all over the world… She “does” Jesse Norman on “Amazing Grace”; a Hutu prisoner in Rwanda; preacher Peter Gomes at Harvard; the late governor of Texas, Ann Richards, brave and brassy at the approach of death; and, among others, Gabriel Saez, the unlucky jockey on Eight Belles, the filly who succumbed after her second-place finish in the Kentucky Derby. People have found fault with this show, Let Me Down Easy, for its scattered focus, but I liked it better for threading the spooky uncertainty and disbelief of this moment through such an odd lot of anxious minds.

A theme of this show and our conversation is “grace.” Her subtitle is “Grace in the Dark.” We push and pull some on this subject, this word. Grace to me is divine magic, not a secular virtue; it’s a theological idea, inseparable from the formulations in St. Paul’s Letters. “For by grace you have been saved through faith, and that not of yourselves,” in Ephesians, for example. “It is the gift of God…” I think of grace as the catalyst of transformed vision. Anna Deavere Smith looks for grace and finds it in the suffering of this world.

I’m looking through the lens of: Is there any grace here? Is there any grace in a tough situation? And trying to define grace at the same time. And finding people who are the exemplars of grace even in places you’d least expect to find it. For example in Rwanda. Who would think that you could go to Rwanda, the site of a genocide, and find grace? And I did in the form of the way people are dealing with the idea of forgiveness. One of the characters talked about giving grace — actually differentiating that from forgiveness, because she said that forgiveness is something you give when someone asked for it; and her awful predicament is that the killers of her family have not come and asked. She says: I’m giving them grace. She’s saying: I’m not holding onto you in my heart anymore…

I think the definition of grace is broader than the religious definition of it. We find it in the world. I visit a garden to find it. We find it in other kindnesses. In a way I’m thinking about it almost like kindness. The other exemplar to me of grace — and I don’t know what her religious background is — is a woman in Johannesburg, South Africa who has an orphanage for children who are dying of AIDS. And she sits with every child who’s dying and talks to them about what’s happening.

Anna Deavere Smith of Let Me Down Easy in conversation with Chris Lydon, October 1, 2008

Anna delivers her most powerful points here in three generous performances from the show, in the voices of Dr. Kiersta Kurtz-Burke at the Charity Hospital in New Orleans; Trudy Howell, director of the Chance Orphanage in Johannesburg; and Ann Richards, in a hospital in Houston. You are invited to listen over and over, and of course to comment on grace, on Anna, on what you and we are going through.