“Everybody wants a piece of Orwell,” says Abbott Gleason. Gleason’s a professor of history at Brown University; more important, he’s right. Orwell was, more than anything else, a skeptic, suspicious of utopians and zealots. He was a kind of socialist, but his socialism was rooted more in anger than in hope. He went to Spain to see a civil war and wrote — in “Homage to Catalonia” — not about bravery or camraderie, but about head lice and incompetence.

And then he wrote the definitive work on totalitarianism, only it’s a little slippery for anyone to claim completely. The bad guys in “1984” look like communists or fascists, depending on what you cite, and its hero finds absolution in love and a book of verse. Doesn’t everyone like those two things?

And he lives on, Orwell. Says Gleason:

George Orwell has turned out to be an amazingly durable writer, especially in view of his intimate connection with the Cold War, now receding into the past. A great many writers who appeared for long years to be among the twentieth century’s most important are now read by far smaller numbers. Their readers are rarely from the general public but are mainly academics, or specialists, or members of coteries. This is even true of major modernists, like Proust, Joyce and Kafka. But the years roll on and books on Orwell continue to appear, both biographies and appropriately titled commentaries like Christopher Hitchens’ Why Orwell Matters, to say nothing of the enormous edition of his complete works.

Steve Jobs has used him to sell computers; Michael Moore used him to frame a movie about George W. Bush; Norman Podhoretz has claimed him for the neo-conservatives who always saw communism for what it was. And just this month, a group that calls itself The Ministry of Reshelving Project has been shifting bookstore copies of “1984” from “fiction” into “current events.”

Interview with Jane McGonigal of the Ministry of Reshelving Project

Who owns Orwell? Are we living in Orwell’s world?

Down and Out in Paris and London

A Collection of Essays by George Orwell

Editor, On Nineteen Eighty-Four: Orwell and Our Future

From Brendan’s Pre-Interview Notes
One reason for Orwell’s continuing popularity is that he’s a thinker who both the left and right badly want. There’s almost no one like him. He’s a socialist with a considerable historical reputation, anti-soviet, but remained in favor of nationalization of certain industries.

Not a dramatic evolution to anti-soviet, not like the others — Whittaker Chambers — who moved from radical left to radical right. That’s all the more reason why the right wants him, a more credible witness. Orwell never had a conversion.

Always anti-authority, Orwell would NEVER support tax cuts that went to the rich like that; coulc be claimed that he was so hostile to totalitarian-style governments that he would have supported the war in Iraq.

1984: It’s extraordinary that a tremendous number of Soviet people who read it clandestinely said that he understood the Soviet Union better than the rest of us. How did he know? The seediness, the dirt, the bad food, all come from London during the war, he’s sentimental about rural life, hated bureaucratic governments, committed to liberal individualism, had some direct experience with Communists in Spain, they tried to kill him on his way out of the country.

He of course was very, very interested in the idea of betraying the revolution, Animal Farm is about that, he managed to get something about the Soviet Union that nobody else got, certainly no one else expressed in such a playful manner.

He’s a bible of twentieth-century politics, everyone can find what he wants. There also grew up around him the persona of the virtuous man, a truly free person who will tell the truth whatever the price.

[On the phone from California] 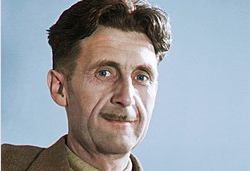 This show first aired on November 11, 2021. George Orwell rests now with the immortal English writers. But why? For impact and influence, you could argue that Orwell in his novels...