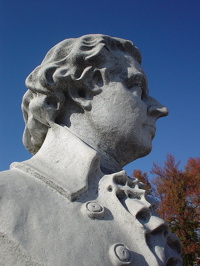 If an unidentified page of a musical score drifted up on a wave at the beach one day, my question is: how long would it take an alert intelligence to recognize that there was genius in the notes? How long to decide that it was in fact a missing fragment from the pen of Wolfgang Amadeus Mozart?

Mozart is of course the universal definition of unaccountable, virtually divine creative energy — the moreso because his years (35) were so few, like Charlie Parker’s (34) and Franz Shubert’s (31).

But surely there is some accounting to be done of the magic we can all hear in Mozart, from “Twinkle, Twinkle Little Star” to the Rondo in A-minor, K. 511, which many millions of us piano students keep trying to play; to the Jupiter Symphony and the “Elvira Madigan” slow movement, to which we’ve all swooned, in his 21st Piano Concerto, in C.

The late composer Earl Kim used to tell me that there was a identifiable miracle in every measure of Mozart–a tie, a dot, an interval, a question, a pulse — that makes it not just unlike anything else in music but, for players, makes it a different elixir, a fresh statement, every time they meet it. The pianist Robert Levin likes to say that in every Mozart piece — the string quartets, the symphonies, the keyboard pieces — there is without exception a human conversation going on in the notes, and a clear trace of the musical dramatist that composed Don Giovanni and the rest of the operas.

All I want in this 250th birthday year is to hear more Mozart with bigger ears, with a better grasp of the drama and the details as well as the life.

Once upon a time, Russell was Craig’s piano teacher at the New England Conservatory. For decades now they’ve had the standing of Zen masters and standing-room-only musical cult figures–individually and together. I think of Russell Sherman as the Glenn Gould of our time and our neighborhood: an exquisitely original interpreter of the most daunting piano literature, as mesmerizing as a teacher-talker-writer as he is at the keyboard. Craig Smith found himself a conductor by accident when the Emmanuel Church in Boston was suddenly without a leader and he emerged from the students in the chorus. In 30-plus years since then he has led Emmanuel through several complete cycles of J. S. Bach’s Cantatas, and with the director Peter Sellars he has made television history and a world-famous name for restaging the Mozart operas — and Bach cantatas, too — with modern meanings in modern dress.

Together Russell Sherman and Craig Smith have for years been marking Mozart birthdays with their joint performances of the piano concertos — church concerts with the electric tension of World Series games. For the 250th Russell Sherman will be making five concerts of the complete set of Mozart’s 19 piano sonatas, starting on the birthday night, January 27. But first they are going to share a few secrets with us.

Web Features
What Bloggers Say About the Piano Sonatas This show first aired on September 30, 2021. Who else could be said to make you smarter, just listening to the sound of his music? Only Mozart, that we know. For...