[Thanks to hurley and valkyrie607 for pitching this idea.] 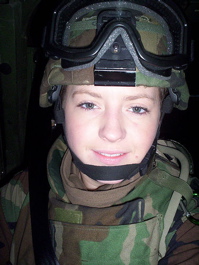 American women are serving, getting injured, and dying in Afghanistan and Iraq in numbers far greater than in any previous war. Over 160,000 women have served there, and so far 72 have died in Iraq. Most significantly — because there are no front lines but plenty of ambushes and roadside IEDs — many women are, for the first time, engaging the enemy even though they’re not in ground combat units.

Women were allowed in the peacetime military soon after WWII, but it wasn’t until the 1970s that they were admitted to the service academies and integrated into regular units in all of the forces. Women were prohibited from any combat position until the 1990s, when they were allowed to fly combat aircraft and serve on combat ships. They now make up roughly 15 percent of the armed forces, but they still don’t serve in several combat arms branches — most notably the infantry.

Because so many women are experiencing violence in Iraq and Afghanistan, it’s adding tension to a longstanding battle over women’s right to serve in every part of the military. At issue — from the perspective of men who’d rather not see women in the infantry — are on-the-ground realities of unit cohesiveness; distraction because of sexual attraction; women’s physical strength; problems of women and men sleeping, showering, and using bathrooms together in the field; and men’s willingness to send women into dangerous situations. In other words: anything that might detract from a mission’s effectiveness. Military women who want all doors open to them say these arguments echo old ones against integrating black and white units — and that all of them have ready answers. Other countries (like Canada and Germany) already allow women in ground combat.

The elephants in the room here are sexual harassment and assault. Some believe they bolster arguments against allowing women in the infantry. Others feel they’re a symptom of a macho military culture that refuses to accept women as equals. Rape and harassment are unquestionably a problem [pdf file] in the military, but they’re part of civilian life, too. So are they any more prevalent in the armed forces? If so, what are the reasons? How significant is the fact that women are a small minority and therefore easy to pick on? Is the background of the typical enlisted man — or woman for that matter — relevant? How much of the solution lies in better training? Or in leadership at all levels?

All of these questions about women in combat and sexual violence are slippery and fraught and surely more layered than we can get at in an hour, so what are you most curious to know or ask?

After a fair amount of smiling and dialing (as Mary calls it) and trying to figure out how to put this show together, we’ve decided that we want to talk to as many Iraq veterans as possible rather than stacking the hour with military experts.

So because we won’t have room for a statistics wizard to explain the confusing sexual assault numbers — and because many of you have been asking about them in the comment thread — here’s what we’ve found out: The Miles Foundation — an NGO dedicated to research on, education about, and services for military victims of sexual and domestic violence — put it this way: It’s basically impossible to compare the military numbers reliably with the civilian numbers. This is because different organizations are collecting the data (DoD, VA, a variety of civilian institutions) and using different methodologies (various survey or self-reporting methods). The Miles people stay on top of all the data, and their best guess, based on the numbers, is this: The rates of sexual assault are higher in the military than in the civilian world. And the rates go up during wartime.

The Miles Foundation was also, by the way, one of two sources that told me the story in the Salon piece Potter mentions about the women dying of dehydration in their cots is false, completely unsubstantiated by the death records.

We’ve been at war in Iraq and Afghanistan for longer than we fought in WWII, without a draft or any national call to serve. While the political fight over withdrawal...