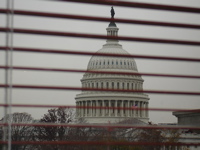 Peering through the seedy side of Washington. [Eva Mendez /Flickr]

Ana Marie was the first blogger at Wonkette, a site she built into an institution. She has been portrayed on The West Wing and she showed up on the cover of the New York Times Magazine; she is unserious and scathing and disdainful and less obsessed with politics than she is with politicians. She is described as “snarky” or “breezy,” but to see her on a panel with fake White House reporter Jeff Gannon is to understand what Madam Defarge might be doing, were she alive today.

She skewered him, in short.

Lots of skewering to do in the coming months, particularly with the promise of indictments to come on the event she’s begun to refer to as “Abramoffukah”; what do we want to ask of Ana Marie Cox, and what of Washington do we want her to help us understand?

We have, by luck or coincidence or our clearly unimpeachable reputation, pulled together a holy trinity of understanders of Washington: the Wonkette, the wonk and the screenwriter.

I also, over three hours at Charlie’s Bar in Harvard Square last night, went and read most of Cox’s novel, Dog Days. Some quotes:

She asked Julie, who didn’t even glance up from her Vogue magazine. ‘Oh please, congressmen? They’re like interns. Why bother learning their names?’

There was something quaint and stupid about all the time bloggers put into these deconstructions. … She had heard that bloggers called it “Fisking.” Julie called it “fish slapping,” after the Monty Python sketch in which two men took turns prancing up to each other, slapping each other with a mackerel, and prancing back.

The book is, though, in its own strange way surprisingly sincere.

Of course there were payoffs and dirty tricks in the past, but the issues themselves weren’t so thin and packaged. They played the game back then, too, but it somehow seemed more worth winning.

And, in the first person, from the acknowledgements:

But most of all, thanks for working so hard for so little when so much was at stake. Campaigns can be foolish; what you’re fighting for isn’t.

Click to Listen to the Show (24 MB MP3) Four summers ago, the city of New York opened back up at two every morning to watch soccer games in cities four...

Collapse of the Senate Immigration Bill

Click to Listen to the Show (24 MB MP3) Last week the Senate’s immigration bill — championed by George Bush, John McCain, and Ted Kennedy — collapsed under the pressure of...